Jan Shapiro is not only a great voice teacher--she's been on the faculty of Boston's Berklee College of Music for the past 28 years--but is also a world-class practitioner of the art of jazz singing. That fact is particularly evident on the exquisitely intimate "Piano Bar After Hours," her fourth CD (and third for her own Singing Empress label). 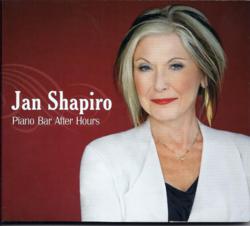 I'm not like the expected jazz singer, who would have a lower timbre and hold everything straight. I don't sound just like anyone.

Jazz vocalist and longtime Berklee College vocal professor Jan Shapiro chose to focus on the challenging—and revealing—duo format for "Piano Bar After Hours," her fourth CD and her first since 2007’s "Back to Basics." Shapiro tapped six of her favorite pianists, with whom she’d worked in various settings through the years, to accompany her on the new disc, which will be released by her Singing Empress label on April 9.

Before arriving at Berklee 28 years ago, Shapiro spent more than a decade on the road singing with bands five nights a week on the hotel circuit, from St. Louis and Chicago to such points east as Atlanta, New York City, and Washington, DC. By the early Eighties, however, changes in the economy had forced many of the venues at which she worked to employ her with a full band only on weekends. On weeknights, it was just Shapiro and a pianist.

That familiar setting is revisited on "Piano Bar After Hours," with Shapiro applying her glowing, pitch-perfect three-octave soprano to a thoughtfully chosen program of jazz and American Songbook standards (“If I Were a Bell,” “They Say It’s Wonderful,” Horace Silver’s “Doodlin’,” “Times Lie”) and pop songs of more recent vintage (“Lost Up in Loving You,” Rickie Lee Jones’s “Company”). Ten of the 11 tracks are voice-and-piano collaborations, as pianists Daniela Schachter, Bob Winter, Tim Ray, Russell Hoffman, John Harrison III, and Adriana Balic take turns supporting Shapiro. For the 1984 Al Jarreau song “Tell Me,” she and Balic were joined by Joey Blake on vocal bass and Bob Stoloff on vocal percussion. Both men have taught at Berklee and have worked with vocal innovator Bobby McFerrin.

“I was trained in traditional classical technique,” Shapiro says of the influence of her classical music training at Howard. “It was invaluable, but since I’d always had classical training, I sometimes wondered if too much classical training would be difficult to transfer to pop and jazz styles. As it turned out, it was! If you have a Julie Andrews-type voice, as I do, how do you sing pop or jazz? It’s a different aspect of your instrument, and the timbre and delivery of singing jazz is completely different.”

“I don’t know what category to put me in,” she says of her unique style. “I’m not like the expected jazz singer, who would have a lower timbre and hold everything straight. I don’t sound just like anyone.”

After moving to Boston, Shapiro earned a master’s in education at Cambridge College, and received an NEA grant, which she used to research early jazz singers and the Boswell Sisters. She became acting vocal chair at Berklee College of Music in the summer of 1996, and by January 1997 she was appointed head of the department—the first female chairperson in Berklee’s Performance Division. Shapiro served as chair until 2010 and remains a full professor at Berklee, currently teaching a class in vocal history; she also has 25 private students.

“As a teacher, my philosophy has been ‘not everyone will be a star,’” says Jan, “‘but there are practical things you can learn about your instrument.’ I want to make sure that singers become empowered by good musicianship as well as excellent vocal craft.”

On "Piano Bar After Hours," Shapiro practices what she preaches through her breathtaking combination of flawless technique and depth of feeling.