Tiger is Back - Arnold Palmer Invitational - 2013 Masters Tickets and Packages for the 2013 Masters Golf Tournament at MastersTickets.co from Inside Track Tickets

Golf enthusiasts from around the world can now find 2013 Masters tickets, golf news and hospitality packages to accommodate their needs during the 2013 Masters Golf Tournament in Augusta, GA at http://www.MastersTickets.co. 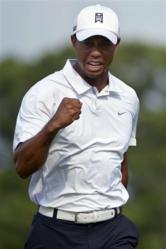 Tiger Woods, as of March 25, 2013, will return to the top of the World Golf Rankings at number one. The last time Woods was number one was 29 months ago. To gain his position back, Tiger held off Rickie Fowler and Justin Rose in the final round today. Fowler was a strong competitor on the back nine, until he hit two balls into the water on a par-5, causing him to score a triple bogey. Woods finished at 13 under par, two shots better than his partner Rose. Along with his win today comes many statistics. This win marks his 77 PGA tour win, which is only 5 behind the all time leader, his 8th win at the Arnold Palmer Invitational, which is tied for the most wins at a single tournament ever, and his 3rd win in 2013. The next tournament for Woods is the 2013 Masters Tournament in Augusta, Georgia. Woods has not won a major tournament in 5 years, and with the momentum he has going into it, this could be his chance. His last Masters win came in 2005. Tiger has been at the top of his game lately, and has everything going for him. However, players like former number one, Rory McIlroy, and reigning Masters champ Bubba Watson will be after that jacket just as much as Woods. Get your tickets to this show down of champions at http://www.MastersTickets.co