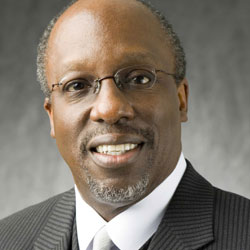 Vision to Victory is an expression of United's longstanding commitment to the African American Church and our respect and admiration for Dr. King.

On April 16 and 17, 2013, United Theological Seminary will host Vision to Victory, an annual celebration honoring the life and ministry of Dr. Martin Luther King Jr. around the time of his martyrdom.

Dr. Charles Booth is the featured speaker at 7:00 p.m. on Tuesday, April 16, at Omega Baptist Church, 1821 Emerson Avenue, Dayton, with a reception following. On Wednesday, April 17, Dr. Booth will preach at United’s chapel service, held at 11:15 a.m. at the campus at 4501 Denlinger Road, Dayton.

Dr. Booth, a native of Baltimore, MD, is the Senior Pastor of the Mt. Olivet Baptist Church in Columbus, OH, where he has faithfully served for more than 31 years. Dr. Booth received a Bachelor of Arts from Howard University, Washington, DC, a Master of Divinity from Eastern Theological Seminary, Philadelphia, PA, and a Doctor of Ministry (Proctor Fellow) from United Theological Seminary, Dayton, OH. In addition to providing pastoral leadership to the Mt. Olivet Baptist Church, Dr. Booth currently serves as Professor of Preaching at Trinity Lutheran Seminary in Columbus, OH, and has served as Vice President of the Millennium Association of Pastors.

“Vision to Victory is an expression of United’s longstanding commitment to the African American Church and our respect and admiration for Dr. King,” said President Wendy Deichmann.

United, now in its 142nd year, is one of the fastest growing theological schools in the United States. It was founded in 1871 by Milton Wright, a Bishop in The United Brethren Church and father of Wilbur, Orville and Katherine Wright. United offers accredited, innovative graduate and non-degree education programs for both clergy and laity. See http://www.united.edu for more information.