Special Interfaith Screening of Two Who Dared: The Sharps' War on March 28th at the Jacksonville Jewish Center

The Unitarian Universalist Church of Jacksonville is joining with the Jacksonville Jewish Center to present a special interfaith screening of Two Who Dared: The Sharps' War. This film, a project of No Limits Media, tells the story of Martha and Waitstill Sharp, who left their own children behind during WWII to rescue imperiled refugees, adults and children. 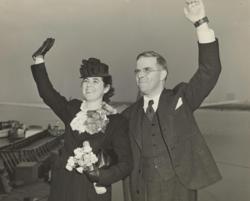 "Join our community of up standers, who dare to make a difference!"

The Unitarian Universalist Church of Jacksonville, Florida, in conjunction with the Jacksonville Jewish Center, will host a special interfaith screening of the documentary TWO WHO DARED: THE SHARPS' STORY on Thursday, March 28, 2013. TWO WHO DARED tells the story of a Unitarian minister, Waitstill Sharp and his wife Martha who, just days prior to the Nazi invasion of Czechoslovakia, left their young children in Wellesley, Massachusetts to help save thousands being persecuted in Eastern Europe.

Jacksonville resident, Joe Strasser, one of the children rescued by the Sharps, will attend the screening and will be available for questions after the film.

Who were these American heroes? What drove their willingness to put the wellbeing of strangers over that of themselves and their family?