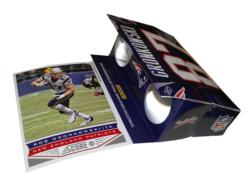 FanOculars LLC is pleased to announce a new partnership with Panini America, a subsidiary of The Panini Group, the world leader in officially licensed sports and entertainment collectibles.

FanOculars are portable, foldaway binoculars with custom team and player images printed directly on the front and back. FanOculars are not only useful to help fans enjoy a sporting event, but the unique images and custom player designs turn an ordinary pair of binoculars into a must-have collectible for fans.

The agreement with Panini America allows licensed sports cards of stars in the National Football League, National Basketball Association and National Hockey League to be added to the end of FanOculars. The attached Panini cards are an authentic, current release card, licensed through the respective leagues.

Panini is the world leader in officially licensed collectibles and is the most significant publisher of collectibles in the U.S., with official licenses for MLBPA, NBA, NFL, NFLPA, NHL, NHLPA, FIFA, USA Baseball, Disney, Nickelodeon, Hello Kitty, Warner Bros. and exclusive autograph and memorabilia relationships with some of the NBA’s most recognizable players, including five-time NBA champion Kobe Bryant of the Los Angeles Lakers, Kevin Durant of the Oklahoma City Thunder, Blake Griffin of the Los Angeles Clippers and Kyrie Irving of the Cleveland Cavaliers. Panini also has an exclusive memorabilia relationship with Indianapolis Colts Quarterback, Andrew Luck .

This new product will be sold as a promotional item to the aforementioned sports leagues, as well as the teams and sponsors associated with these leagues. They will be sold and marketed by an existing network of the best marketing agencies and promotional companies in the country.

FanOculars’ partnership with Panini America adds to its impressive lineup of sports partnerships, which also includes The Topps Company and Mantle I.P. Holdings. Together with the recent agreement with The Topps Company, FanOculars now has access to sports cards from all four major U.S. sports leagues.

“Adding an authentic sports card from Panini America to FanOculars will make for a unique and exciting new product," said FanOculars President David Ballou. "We plan on introducing this new product immediately to all the sports leagues where Panini holds licenses. We look forward to a mutually successful partnership with one of the most innovative and creative companies in sports."

About Panini America: The Panini Group, established more than 50 years ago in Modena, Italy, has subsidiaries throughout Europe, Latin America and the United States. Panini is the world leader in officially licensed collectibles and is the most significant publisher of collectibles in the U.S., with official licenses for MLBPA, NBA, NFL, NHL, FIFA, USA Baseball, Disney, Nickelodeon, Hello Kitty, Warner Bros. and other key properties from many other licensors. Panini has distribution channels in more than 100 countries and employs a staff of over 800. For more information visit us at http://www.paniniamerica.net, http://www.paninigroup.com or http://www.paniniamerica.wordpress.com. You can also follow Panini America on social media platforms Facebook, Twitter and on YouTube.

About FanOculars LLC
FanOculars LLC, a privately held company based in Jupiter, Fla., is the production, distribution and marketing company for the FanOculars brand. The company has established partnerships with some of the most endearing names in sports, including The Topps Company, Panini America and Mickey Mantle Holdings LTD. FanOculars continues to seek additional strategic partners to enhance the brand and advance the business objectives.
For more information, visit http://www.FanOculars.com