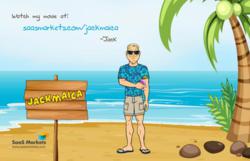 Watch “Jackmaica”, the movie, to find out how Jack the app developer leverages the SaaS Commerce Network.

The company launched its Jackmaica video campaign to help educate cloud-based app providers about the benefits of being part of the network.

This week, the company launched its Jackmaica video campaign to help educate cloud-based app providers about the benefits of being part of the network. The Jackmaica video is targeted to the growing number of web-based application providers, who are competing in an increasingly crowded landscape for highly qualified small to medium-sized business (SMB) customers. Jackmaica can be viewed at saasmarkets.com/jackmaica and shows how Jack the App Developer leverages the SaaS Commerce Network™ to get his SaaS app in front of millions of small to medium-sized business customers.

While Jackmaica (named after Jack’s private island) strives to entertain as well as inform, its main point is that inclusion in the SaaS Commerce Network™ is a much more effective and affordable option for many app developers than traditional marketing tactics, such as SEM campaigns and other forms of advertising. By paying only on a cost-per-acquisition (CPA) or cost-per-click (CPC) basis for highly qualified leads, application providers can build their business with minimal marketing investment, focusing instead on building high quality, web-based software to solve a specific business problem.

SaaS application providers interested in listing their app on the SaaS Commerce Network™ can fill out a simple online profile page or learn more at saasmarkets.com.

SaaS Markets, based in San Mateo, CA designs and delivers app stores for the software-as-a-service (SaaS) market. Through relationships with major financial institutions, retail brands, technology companies, small business associations and leading brands, SaaS Markets is bringing software-as-a-service to millions of small and medium-sized businesses across the globe. SaaS Markets offers individual businesses a user-friendly portal that makes it easy to choose the SaaS tool that is right for their business needs. Learn more at: http://www.saasmarkets.com, or call 650.458.0748.