More than 4,500 Scientologists from 40 nations gathered for the annual gala celebration of Scientology Founder L. Ron Hubbard’s birthday (March 13) held in Clearwater, Florida, home to the Church of Scientology’s spiritual headquarters. The weekend of events commemorated Mr. Hubbard’s enduring legacy in an era of unprecedented growth for the religion. 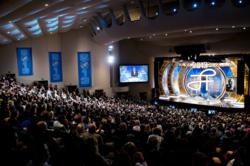 Accordingly, we present what L. Ron Hubbard explicitly wished for on his birthday: the gift of expansion. It’s a gift
 most dramatically expressed in our continuing parade of Ideal Churches of Scientology.

More than 4,500 Scientologists from 40 nations gathered for the annual gala celebration of Scientology Founder L. Ron Hubbard’ s birthday (March 13) held in Clearwater, Florida, home to the Church of Scientology’s spiritual headquarters. The weekend of events commemorated Mr. Hubbard’s enduring legacy in an era of unprecedented growth for the religion.

The celebration began on Saturday evening, March 16, with an event presided over by Mr. David Miscavige, Chairman of the Board Religious Technology Center and ecclesiastical leader of the Scientology religion. He welcomed the overflow crowd, presenting a panoramic view of Mr. Hubbard’s immense legacy as an author, humanitarian and Founder. Among the milestones of the last year, Mr. Hubbard’s written and recorded works in circulation surpassed 335 million. The last twelve months further saw more than 100 international awards and recognitions bestowed to Mr. Hubbard for his contributions to humanity.

Mr. Miscavige said: “Tonight we celebrate a legacy that is indeed al lencompassing, uplifting and everlasting. Accordingly, we present what L. Ron Hubbard explicitly wished for on his birthday: the gift of expansion. It’s a gift ost dramatically expressed in our continuing parade of Ideal Churches of Scientology, which, as of this evening, number no less than thirty six. They stand as cornerstones from which we extend his technology of Dianetics and Scientology, and hence, the precious gift of spiritual freedom itself.”

Mr. Miscavige introduced the newest Ideal Organizations (Ideal Orgs)—the first of more than a dozen to open in the coming year. First was the Ideal Church of Scientology of Padova, Italy, which now occupies a landmark 18th century villa serving the Northern Italian region of Veneto. The villa, meticulously restored by the Church, today stands as a symbol of Venetian culture and landmark for all of Padova. Next was the Church of Scientology of Cambridge, Ontario—providing for Cambridge, Kitchener and Waterloo, the tri-cities that lie at the heart of Canada’s high-tech region known as the “Technology Triangle.” And finally came the new Church of Scientology of Pretoria, capital of South Africa. Its new home stands less than a block from Embassy Row and neighbors the Union Buildings, official seat of the South African government and home to the presidential offices.

The birthday celebration further featured a biographical presentation on Mr. Hubbard’s life at Saint Hill, the estate in Sussex, England, that served as his home and worldwide headquarters for the religion until 1967. Autobiographical vignettes selected from Mr. Hubbard’s recorded works illuminated the vivid history of his Saint Hill years. Included was the story of his appointment to the local Road Safety Council in the wake of rising traffic fatalities and his safety campaigns that significantly reversed the trend. Beyond the indelible mark he left upon Sussex were his accomplishments that resonate globally. Among them: his horticultural experiments to radically increase crop yield, heralded internationally as “a discovery of immense significance” well ahead of their time; and his famed tudy of photography, which figured prominently in the development of his Study Technology now employed by students and teachers world over.

The celebration culminated in the annual awards ceremony for the winners of the LRH Birthday Game, a tradition initiated by Mr. Hubbard in 1974. The awards recognize Scientology organizations at every echelon for outstanding expansion of Church services and humanitarian programs in their respective zones. This year’s champions included the Mission of Belleair, Florida, first among the league of 435 Scientology Missions internationally; the Church of Scientology of Greater Cincinnati, which celebrated a first win after opening the doors on its new Ideal Org last year; the Advanced Organization Saint Hill in the United Kingdom, taking the trophy among Scientology Churches delivering higher level religious services; and the champion continental management office of the Western United States, instrumental in opening five new Ideal Orgs in the past year.

Immediately following the event, receptions were held in multiple venues across Clearwater, including the historic Fort Harrison’s Grand Lobby and Portico. The event was filmed, translated into 16 languages and transmitted for screening to parishioners in more than 100 cities worldwide.

The festivities continued on Sunday, March 17, with the International Association of Scientologists (IAS) Patrons Ball, held in the Grand Auditorium at the Fort Harrison.

The elegant evening honored stellar IAS patrons who, through their membership, forward the aims of Scientology as originated by L. Ron Hubbard: “A civilization ithout insanity, without criminals and without war, where the able can prosper and honest beings can have rights, and where Man is free to rise to greater heights.”

In part, Patrons’ support assists the religion to achieve its greater humanitarian objective and meet global demand for Church-sponsored programs. These include a worldwide human rights education initiative; an equally far-reaching drug education, prevention and rehabilitation program; a global network of literacy and learning centers; and the Scientology Volunteer Minister program, now comprising the world’s largest independent relief force. The Church’s humanitarian programs reached more than 200 million people across 105 nations in the last year. Entertainment for the black-tie affair included a Broadway-style Musical Revue, starring an international cast of performers from the United States, Italy and England.

The Scientology religion was founded by L. Ron Hubbard in 1952 and the first Church of Scientology was formed in Los Angeles in 1954. The religion has expanded to more than 11,000
Churches, Missions and affiliated groups, with millions of members in 167 countries.