Prince Ojong, a self-styled Robin Hood of personal finance, is using his soon-to-be-published book as a medium to share the money secrets of America's rich and famous people on Wall Street with the poor folks on Mean Street. 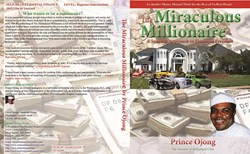 The Front Cover of The Miraculous Millionaire

Making big money in America is an art, a science, and a philosophy.

The Miraculous Millionaire is a personal finance book Prince Ojong wrote as a meted response to the Occupy Wall Street protest and movement against social and economic inequality. De jure, the primary goal of the movement was to make the economic and political relations in American society less vertically hierarchical and more flatly distributed.

By stealing the fire of knowledge from the rich and giving it to the poor, Prince Ojong, an African immigrant from Cameroon, sought to create a real game changer; thus, he wrote the do-it-yourself money manual to appease the poor protesters: to teach them how to get rich in America or make it big like the fat cats on Wall Street.

Prince Ojong shows that America is still the land of dreamers and pioneers. You, too, can join the dream club of Wall Street wealth. For instance, when he first arrived America, he had a simple dream: to get rich or die trying. Prince Ojong arrived in America from the small African state of Cameroon with little more than the shirt on his back and 10 vinyl discs of the Makossa music of his homeland, but he mustered the drive and determination to succeed. He started off doing the regular 9-5 mean jobs that every immigrant does: dishwashing, security guarding, and errand running. Unlike most immigrants, though, he had a game plan, which he implemented little by little. He has now succeeded beyond his wildest dreams and is a millionaire in his own right. Prince Ojong is, however, not a selfish man; he has brought his whole family to America, and he wants to share this specialized knowledge of moneymaking with others.

What is the best way to codify these millionaire secrets other than the writing of a book?
As a money manual for the masses, The Miraculous Millionnaire is Prince Ojong's odyssey, a record of his drive to become rich, the steps he took, and the time he spent burning the midnight oil to achieve his dreams.The book is easy to read and digest. Above all, the book presents twelve easy steps to follow for anyone who also wants to realize his dreams. Do you want to be a millionaire? Follow Prince’s instructions. Guarantee your financial success by one hundred percent. Get your copy of The Miraculous Millionnaire at Amazon.com.

Prince Ojong, the Robin Hood of Personal FinanceThis is a picture of Prince Ojong in a traditional attire.