“Destiny Bridge… Dare to Believe God” is available now wherever books are sold. 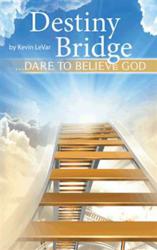 "Our limitations do not limit God." -- Kevin LeVar

CrossBooks, an imprint of B&H Publishing Group, has released “Destiny Bridge… Dare to Believe God,” the debut book release from popular Gospel recording artist Kevin LeVar. Though primarily known for penning powerful lyrics with hits like “A Heart that Forgives," LeVar now shows that his gift of writing extends far beyond the world of music.

“Destiny Bridge” is a must read for anyone who has ever had a dream. LeVar challenges the reader to "get out of the boat" and experience the joyous life that awaits every dreamer that takes a step a faith.

"Our limitations do not limit God," says LeVar in his new book. "What qualifies us to be used by God is not the abilities we possess, but having a heart that says ‘Yes.’ God can take the pain of your past and use it to paint a masterpiece on the canvas of your tomorrow."

With the release of “Destiny Bridge,” LeVar is becoming a highly sought-after speaker, in addition to his already successful music career. On May 15-18, 2013, LeVar will host the Dream Now Dreamers Conference in his hometown of Washington, D.C.

Following the release of his debut album, "Let’s Come Together," the music videos for “You Are Not Alone” and 'A Heart That Forgives" shot to #1 on GMC and both earned GMC Video Award “Best Video” nominations. LeVar has since become a regular guest on Christian television programs and has made high-profile appearances at the White House, Super Bowl XLIII, NBA All-Star Weekend, the September 11th Memorial, the Tsunami Memorial in Sri Lanka, the Civil War Memorial on Capitol Hill and much more. His hit single, “A Heart That Forgives,” started a movement to inspire one million acts of forgiveness. For more information about the Forgive & Live Today Campaign, visit http://www.forgiveandlivetoday.org. For more information on Kevin LeVar, visit http://www.kevinlevar.com.