Legendary Names in Classical and Contemporary Music Join Together for At-risk Children on the New Album, "WE’LL PAINT YOU A RAINBOW"

HEARTbeats Foundation releases new album to benefit at risk children around the world. 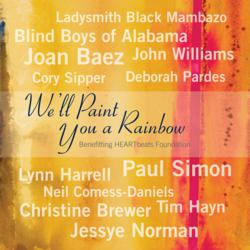 We'll Paint You a Rainbow

“Music is the international language. Devoid of politics, music is one of the greatest teaching tools of peace and is understood by all. As I approach the twilight of my career, my focus is now the future; my children's and the worlds children"

World-renown cellist Lynn Harrell and his wife, violinist Helen Nightengale, have assembled an unprecedented group of celebrated music stars to record the recently released album titled, We’ll Paint You a Rainbow. Paul Simon, Joan Baez, Ladysmith Black Mambazo, Jessye Norman, Christine Brewer, John Williams, the Blind Boys of Alabama, and Lynn Harrell are just a few of the musicians who have given their time and talents to record for the album. This fundraising effort to benefit at risk children through music was released exclusively by iTunes© on March 25th and will be released worldwide on April 8th, 2013.

Serving as Artist Ambassadors for the international nonprofit Save the Children’s HEART program, Harrell and Nightengale were determined to do something that would give hope and the promise of a future to at-risk children everywhere.
“The beautiful collection of classics and new songs that are on We’ll Paint You a Rainbow were recorded by some of the most revered names in classical and contemporary music,” said Harrell. “All of these great artists donated their time and talent, in order to help transform the lives of at-risk children through music,” said Nightengale. “And we are so grateful to them and their ability to inspire all of us to make change.”
In addition to their support of and commitment to Save the Children's HEART program, which brings the proven power of artistic expression through drawing, painting, music, drama, dance and more to some of the world’s most vulnerable children, the couple founded the HEARTbeats

Foundation, a 501(c)(3) charity. Created in 2010, HEARTbeats strives to help children in need harness the power of music to better cope with, and recover from the extreme challenges of poverty and conflict in hope of creating a more peaceful, sustainable world for generations to come “So many of the children we work with cannot go outside their own physical or emotional borders,” says Nightengale. “We hope to give them access to that freedom through music therapy programs.”
Produced by the HEARTbeats Foundation and Nightengale Records, We’ll Paint You a Rainbow’s 13 tracks offer songs about children and peace. INgrooves Fontana is distributing the digital album, at a variety of online vendors including iTunes and Amazon.com for $9.99 with separate tracks at .99 cents each.
The net proceeds from We’ll Paint You a Rainbow will benefit both Save the Children’s HEART campaign and HEARTbeats Foundation, which will also be selling a physical CD for $15 plus shipping and handling through its website,http://www.heartbeatsforchildren.org The CD is accompanied by a 20-page full color informational booklet that includes photos and lyrics.