Is Danang the new Phuket? This is the question tourism operators on Vietnam's Central Coast and travel experts internationally are pondering as domestic and foreign tourism to the area surges. 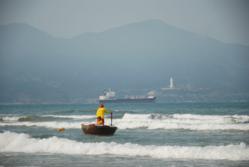 My Khe beach, also known as China Beach, at Danang

As additional international flights are added, tourism and golf tourism to the Central Coast will inevitably expand

Is Danang the new Phuket? This is the question tourism operators on Vietnam's Central Coast and travel experts internationally are pondering as domestic and foreign tourism to the area surges.

This week’s launch of direct Dragonair flights between Hong Kong and Danang is providing a timely further tourism boost to the region that ranks among Asia’s fastest growing and most appealing holiday destinations. Some 630,000 international visitors went to Danang last year, representing 23 percent of the total 2.7 million tourism influx to Vietnam's fourth largest city.

With rapid high-end tourism development on the shores of the South China Sea (called the East Sea in Vietnam), the Hue-Danang-Hoi An area, situated midway between Ho Chi Minh City and Hanoi on the 16th parallel, has all the ingredients of becoming Asia's newest tropical seaside hotspot.

In particular, the owner-operators of the three world-class golf clubs in the area believe the thrice-weekly Dragonair flights, which begin this Thursday (March 28), will bring a further influx of eager golf tourists from Hong Kong, southern China and other markets.

Danang is, after all, more relaxed and scenic than most parts of southern China. With less than a million inhabitants and limited industry, it has clean air and unpolluted beaches, as well as three World Heritage-listed sites in the nearby region, great food and culture, an interesting Vietnam War history and isn't overpriced. Unlike Phuket, it has no safety issues or unsavoury elements. And its golf courses are as good as, if not better, than any public-access layouts in Asia.

Inauguration of the Dragonair service comes just 10 days after the high-profile opening of Laguna Lang Co Golf Club by its designer, Sir Nick Faldo, on March 18. The official opening of the Laguna Lang Co resort, between Danang and Hue – which features Banyan Tree villas, an Angsana Hotel, spas and other upmarket facilities as well as the spectacular 18-hole course – will occur in April.

Laguna Lang Co Golf Club complements two other top-flight golf courses in the area. Montgomerie Links Vietnam, a development by Indochina Capital between Danang and Hoi An, of which the centrepiece is a beautifully-manicured golf course designed by eight-times European Order of Merit winner Colin Montgomerie, opened in 2009. Danang Golf Club, a true links layout designed by 'The Shark', Greg Norman, that is part of a development by VinaCapital including The Ocean Villas resort on the My Khe ('China Beach') beachfront, opened in 2010.

Montgomerie Links and Danang Golf Club have shared the honours as Vietnam’s best golf course for the past two years. Now Laguna Lang Co has emerged as a serious challenger, as well as making the area a true golf destination worthy of a week-long visit. A fourth course, Ba Na Hills in the Danang hinterland, is in the early stages of construction.

All three existing golf courses, as well as the Fusion Maia Resort and The Ocean Villas (adjacent to Danang Golf Club), are members of Golf Coast Vietnam, a marketing collective that promotes golf tourism to the region. One of its members, Mark Siegel, the principal of Golfasian Vietnam, a leading tour operator, says the launch of flights from Hong Kong is “very exciting” and opens up a new inbound market for the region.

“As additional international flights are added, tourism and golf tourism to the Central Coast will inevitably expand," he says. "With renowned world-class beaches, World Heritage sites and numerous other attractions including wonderful food, it is very much on the tourism radar. It’s not an exaggeration to say Danang is Asia’s new tourism hotspot.”

Domestic and international tourism has been boosted by Danang's new airport, which opened in November 2011. It is currently serviced by direct international flights from Singapore, Kuala Lumpur, Seoul, Siem Reap and several cities in China, including Shanghai. Flights from Bangkok are expected to start within a year.

A spate of new oceanfront resort hotels, world-class golf courses, improved tourism infrastructure, plus three UNESCO World Heritage Sites – the Hue Monuments, Hoi An Ancient Town and the My Son sanctuary – are the keys to Danang’s tourism appeal. Already, the region has 10 four and five-star hotels with 2230 rooms and almost 9000 rooms in total are available.

The Dragonair flights from Hong Kong to Danang will operate on Tuesday, Thursday and Sunday with same day return.

My Khe beach, also known as China Beach, at Danang