In an exciting race to the finish, De'Cha Laveau pulls ahead to walk away with the title and prizes. 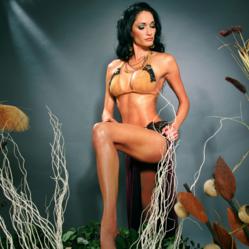 eTalentShowcase.com offers so many opportunities for talent like me, says LaVeau. If you haven't signed up already on the site, you should absolutely do so.

It was a nail biter until the end. eTalentshowcase.com, the premier online talent site, selected 10 finalists and asked fans to decide who should be named winner of the 2013 Model Contest. After weeks of promotions and thousands of votes, model De’Cha LaVeau pulled into the number one spot with just hours to go.

“I’m so happy I won,” says LaVeau, a Louisiana-based former beauty pageant winner who began modeling when she was just 5 years old. “I have an amazing fan base and I am so grateful to them for getting out the vote,” she says. “This is an incredible opportunity for me and I’m really excited.

eTalentShowcase.com offers so many opportunities for talent like me, says LaVeau. “If you haven't signed up already on the site, you should absolutely do so. I have personally made very good contacts through my eTalentShowcase.com network. Plus, it has valuable casting and industry information.”

LaVeau joined the site as part of a nationwide call for entries to the contest in February. A list of ten finalists was announced in March and the site opened the voting to the public via its Facebook page.

“Response to the contest was overwhelming,” says Edward Olimpio, vice president of marketing. “The contest attracted hundreds of fresh faces and emerging talent and although there can only be one winner, everyone who became a member wins in the sense that they now have access to the best talent resource online. Stay tuned as we announce our next big contest this week.”