Blackmun, Kosner and McCune to Be Honored on April 17. 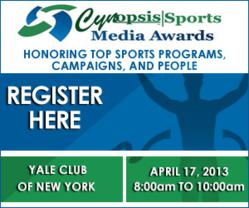 “The work executed by the USOC, ESPN and The Coca-Cola Company in 2012 clearly raised the bar in the sports industry,” said Chris Pursell, Managing Editor of Cynopsis: Sports.

Boasting some of the hottest properties, ratings and brands from around the world of sports, Cynopsis: Sports is proud to announce three distinguished executives who will be honored at the second annual Cynopsis Sports Media Awards Breakfast on April 17 at The Yale Club in New York City. These honorees will be joined by dozens of finalists who are competing for signature sports business awards presented by the daily sports business publication.

The Cynopsis: Sports Media Awards recognize the most outstanding work in the sports industry from the past year with categories that span television, digital, marketing and more.

As part of the festivities, Cynopsis also pays tribute annually with special awards that are given to sports luminaries who changed the way their brands connected with fans across the country and around the world. This year’s honorees represent and lead the some of the most distinguished brands in the industry in: Scott Blackmun, CEO of the United States Olympic Committee, John Kosner, ESPN Executive VP & GM of Digital and Print Media; and Scott McCune, VP of Global Partnerships at The Coca-Cola Company.

“The work executed by the USOC, ESPN and The Coca-Cola Company in 2012 clearly raised the bar in the sports industry,” said Chris Pursell, Managing Editor of Cynopsis: Sports. “We are honored to welcome these distinguished executives to our event. Their efforts, along with the brands they represent, truly drive the business of sports today.”

USOC CEO Scott Blackmun will receive the Vision Award, which recognizes the 2012 executive of the year from a sports league or organization. With the United States topping the medal count at the London Olympic Games last summer, a new revenue distribution agreement in place with the IOC, and a parade of happy sponsors such as Visa, McDonald’s and Coca-Cola, Blackmun’s work was literally on display around the world in 2012.

The 2013 Award of Distinction will be presented to ESPN’s Executive VP & GM of Digital and Print Media John Kosner for the innovations and growth of the company’s digital properties across online, mobile, video and digital audio as well as across fantasy, interactive games and social media platforms. The continued success of digital products such as ESPN.com, ESPN3, WatchESPN and mobile apps not only offers fans new ways to engage, but allows the company to continually develop fresh ways to work with leagues, advertisers and marketers.

For the first time, the publication will honor a sponsor this year, presenting the Cynopsis Gem Award to Scott McCune, VP of Global Partnerships at The Coca-Cola Company for the company’s outstanding work around the world in 2012, highlighted by the Olympic Games. Anchored by the Summer Games, the company’s “Move to the Beat” campaign was launched worldwide in what was dubbed the largest-ever activation of the Olympic Games.

These luminaries, along with dozens of category winners as well as NFL Network President and CEO and Legacy Award winner Steve Bornstein, will be honored on April 17 at the Cynopsis: Sports awards breakfast. Register for the Breakfast event here: http://www.cynopsis.com/events/sports-awards. General categories include awards for the year’s best work in live coverage of a sporting event, apps, new sport show, fantasy game, live stream presentation and marketing campaign. Judges spanned the sports industry and included executives from networks and leagues alike. The full list of finalists and categories can be found here: http://www.cynopsis.com/events/sports-awards.