Rock Band for Kids, Milkshake, to Perform at the Gallo Center for the Arts April 26

Band has won over preschoolers without compromising their music or their rock 'n roll spirit. 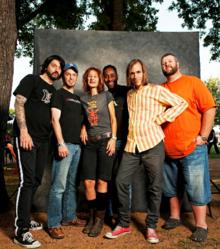 Milkshake, led by singer Lisa Mathews and guitarist Mikel Gehl, whose songs for grown-ups have been featured in movies and prime-time television, and whose indie rock group Love Riot garnered critical praise during its 10-year run, brings its rock 'n roll for kids to the Gallo Center for the Arts on Friday, April 26, at 7 pm.

In conjunction with the band's appearance, the Gallo Center, Macaroni Kid Modesto and The Ice Cream Company in Modesto are conducting a 'Milkshake Party Package' drawing. Beginning March 31, contestants can enter to win 16 tickets to Milkshake’s performance plus a $75 gift card from The Ice Cream Company for a pre-show party. Entries can be made at the Macaroni Kid website. The contest ends April 13, with the winner announced April 14 on the same website.

From the release of their first CD, "Happy Songs," inspired by the birth of Mathew’s daughter and Gehl’s son, Milkshake has won over preschoolers without compromising songcraft, stagecraft or their original rock 'n roll spirit. Evoking influences from Rodgers and Hammerstein to Lennon-McCartney to The White Stripes, Milkshake has in effect managed to create music that appeals to both children and parents.

Since then the band’s songs have been added to radio playlists across the country; a second CD, "Bottle of Sunshine," earned critical plaudits; Noggin enlisted Mathews and Gehl to film two videos for the premiere season of "Jack’s Big Music Show," and Milkshake was asked to be a part of the "Jamarama Live!" tour.