Dr. Karl Jobst’s Facebook Campaign Gives Back to the Humane Society of Grove and Grand Lake 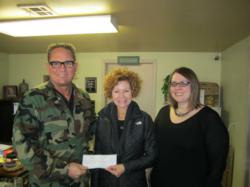 The idea of doing nothing while the number of homeless animals in our society keeps rising is no longer an option.

In December 2012, Dr. Karl Jobst had the idea to do something- anything - for the animals in his community that were without a home. Since Dr. Jobst and several of his office staff members are avid animal lovers, he felt that they had to take action. The idea of doing nothing while the number of homeless animals in our society keeps rising is no longer an option. So many animals are euthanized every single day due to the lack of room in our shelters and the lack of people willing to adopt these precious potential pets. This fact weighed heavily on his heart and prompted him to start a campaign to raise awareness and money for the local Humane Society. Now the task was determining how to go about it.

When Dr. Jobst started his practice, he also started his Facebook page to spread dental knowledge, and be more visible and accessible to his patients. This was the perfect platform to advertise awareness for Dr. Jobst’s campaign. As an added bonus, Dr. Jobst chose to offer an Ipad to one lucky winner once the goal of 500 “Likes” was reached. After the initial post was presented on Facebook, the great people of his community started spreading the word, and it caught on like wildfire, reaching people all across the nation. It was no time at all before Dr. Jobst had reached his goal of 500 “Likes”. On February 15th, Dr. Jobst presented the shelter manager, Kim Nelson, of the Humane Society of Grove and Grand Lake with a check for $1,000. The entire team at the Humane Society couldn’t have been more excited for the support and donation they received from Dr. Jobst and Grand Lake Dental.

Then it was time to randomly select the winner of the Ipad. It took a bit of time to compile the 500 names, but we were happy to present one of our younger patients with this gift. He and his family were very excited to have won.