The latest iOS game release from Slightly Social, A Zombie Kid (Plague the Dead), is another free undead survival game that features hours of multi-level zombie killing. One of the companies first forays into the Zombie Genre, this no-cost mobile app is now available from iTunes as a complimentary download. 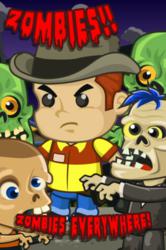 Free Zombie Games are gaining in popularity. iOS gamers can’t get enough of undead entertainment, anything Zombie related seems to be getting a higher download volume.

This new release from Canadian mobile app developer Slightly Social, who are quickly becoming known in Canada for their rapid release cycle of fun to play, early version mobile apps and iPhone games.

"We are taking a lean startup approach to game development." says CEO Brad Mills, "we encourage our team come up with their own ideas, rapidly prototype the concept, get it to a stable version 1, and put it on the appstore to see if people like it! If we get some good feedback and good metrics, we will focus more attention and resources towards that project, if not, we move on to the next project. This cuts down our development cycles from 6 months to release a completely polished app that might flop, to 1-2 weeks to release a slightly soddy app that might flop. Its about getting through the turds to find the truffles."

Slightly Social's new Zombie Game takes place in a fictional metropolis town located somewhere in post apocalyptic North America. The player takes on a roll where he must fight for survival to save his Zombie girlfriend. Armed with a shotgun, or any of the game’s other six zombie destroying weapons, which you can purchase with real money a la the freemium model, you take on wave after wave of Zombies in unlimited levels.

"The game borrows from Zombieville USA where players can enter houses to attempt to get health and ammo. You must fight through a Zombie infected town, and protect your one true love." says Meng Li, one of the developers of the game, and a true romantic at heart. "Out think the enemy and you can survive. Let down your guard or weapon for a moment and you may become a Zombie feast."

Slightly Social is once again proud to be making iPhone games for its growing fanbase in Canada. They wish to announce that you can download A Zombie Kid: Plague the Dead free from the Apple AppStore so travel thru the decimated streets of this undead town, shooting Zombies only on the Apple iOS Store.

About:
Slightly Social a Canadian Mobile Game Developer making high end games for fun and friendly competition. We have the most talented and app-savvy gaming developers on our team. Stay tuned for many new releases coming out in 2013.

Check out our other games on our website:
http://SlightlySocial.com