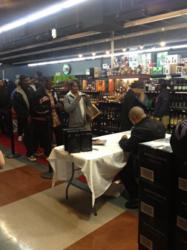 “What a ride it’s been. I can’t wait to see how our third, fourth, and fifth cities top the
momentum that’s already been created,” stated Bonita Spirits Company, CEO Chris Brown.

The Bonita Sprits Company and their celebrity partner, hip hop recording artist, actor, and business mogul Xzibit who is also co-owner of The Bonita Platinum Tequila brand hosted a celebrity meet and greet during an autograph bottle signing at Merwin Liquors in Minneapolis, Minnesota to mark the launch of their national e-commerce distribution partnership this past Thursday on March 21 St. X-to-the-Z as is he known to many of his adoring fans, arrived to a freezing cold crowd of several hundred fans braving the
arctic like weather for a chance to meet the superstar and get their very own autographed bottle of his Bonita Tequila. “It was insane to see that this many people came out to support the launch of the new tequila in this freezing temperature. I live in Cali, so I’m not use to this cold weather. I was like man, this is so cool, literally” laughed Xzibit.

“I was very impressed," said Louis Dachis proprietor of Merwin Liquors. "I had no idea that this many people would show up. It was great.” Success seems to follow the power duo everywhere they land. The Bonita Spirits Company and Xzibit announced a partnership was formed in November of 2012. Since the announcement Bonita Platinum Tequila has been a part of several major television programming including both the GRAMMYs® and OSCARS® gift lounges, Good Morning America and Las Vegas version of Access Hollywood on the Fox More Access Show. The Bonita Tequila product and Xzibit are set to grace the cover of the largest food and beverage publication in the country in the upcoming May 2013 issue of the Food & Beverage Magazine.

The ultra-premium tequila launch in Las Vegas was the first of a 33-city nationwide launch and international expansion over the next twenty-four months. Bonita Platinum Tequila is bottled in pure crystal and wrapped in satin whose luxurious packaging distinguishes it from most of its competitors. As for what is next for the brand, they recently secured international distribution in British Columbia and Alberta Canada and
domestically in Texas.

Bonita Tequila can be found in Lee’s Liquor stores in Las Vegas or by purchasing directly online at http://www.shopmerwins.com/bonita.html. Xzibit is available for interviews regarding Bonita Platinum Tequila. All media requests and press related inquiries for Bonita Spirits Company or Xzibit please contact BonitaSpirits.com/about-2/mediapress/ or contact Shay Brown of Royal Kingdom PR Agency, Inc. at 901-628-8011 or via email at press@royalkingdomagency.com.

The Bonita Spirits Company is one of a select group of celebrity owned spirits in the world. The company was founded in 2010 by Chris Brown, a former airline pilot and accomplished entrepreneur. Bonita Platinum is an ultra-premium luxury brand; the world’s only five-times distilled tequila. For more information on the Bonita Spirits Company, please visit http://www.bonitaspirits.com