Solutions From Science just released a hard-hitting book aimed at helping college students avoid the debt that they could accumulate in college. 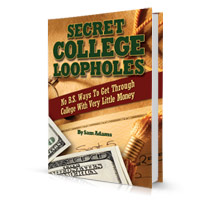 It’s simple. Americans are growing more and more concerned with debt. They are haunted by debt not only on a personal level, but also on a national level. The United States is approaching their debt ceiling and many college...

It is no surprise that students are growing more and more aware that their time in college usually means leaving college with enormous bills. In fact, a Los Angeles Times article published on March 25, 2013 boasted the title, “Student loan debt is biggest concern among the college-bound.” With this growing concern Bill Heid, owner of Solutions of Science, commissioned a new book titled, “Secret College Loopholes.”

This 328 page book takes an in-depth look into how to accumulate less debt while pursuing an education. The book digs deep into how to test out of courses, available resources, military credits, and how to pursue prior learning credits. This hard-hitting book is packed with great information and interactive worksheets to help educate anyone interested in investing in their educational future.

“It’s simple. Americans are growing more and more concerned with debt. They are haunted by debt not only on a personal level, but also on a national level. The United States is approaching their debt ceiling and many college students get out of school with the education they were looking for and a mountain of debt that they are forced to drag behind them for years and in most cases even decades,” says Heid.

On March 10, 2013 USA Today reported that the current student loan debt totals nearly $1 trillion and is beginning to “impede” on the economy. The article goes on to talk about how the mounting student loan debt is directly affecting the housing market by effectively disabling the biggest contributors to the housing market, recent college graduates.

“In business, I have learned to strike a problem down at the source. This book is meant to help college students do just that. I want to help give them the resources that they need in order to get out of college with the least amount of debt as possible,” says Heid. “As Americans we need to work hard to turn this great country around. Helping students reduce their personal debts is a great place to start. But the fact of the matter is that they have got to be able to see that there is an opening at the end of the tunnel and that the hard work they put into getting their degree with little debt will pay off in the end. I believe that this book can help them,” he continued.

For more information on the “Secret College Loopholes” book, go to: http://www.CollegeLoopholes.com.