Korea's largest and most advanced automation exhibition, Automation World took place from 13th to 16th of March with resounding reviews and positive comments from visitors and participants. 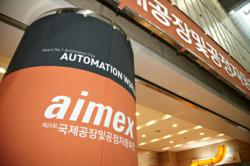 89% of exhibitors confirmed or highly considering participating in next year’s show.

Coex, South Korea's busiest and most well-known exhibition and convention center, welcomed more than 20,000 buyers from all around the world to its hosting of the 24th Automation World. Signaling an exciting increasing interest in Korean manufacturing technology, Automation World welcomed a record 279 Exhibitors at 735 booths, across a massive 18,378 sqm of exhibition space.

Launched 24 years ago, Automation World reinvented itself in recent years by incorporating “show-in-show” pavilions dedicated to cutting-edge factory technology. Automation World is the umbrella show, comprised of both aimex and the Korea Vision Show and recruiting buyers from a range of industry sectors and environments. In line with the impressive development of Korea’s machine vision market, Automation World launched “the Korea Vision Show” in 2012 as a brand new component to the event. In the 2013 edition, Packaging World was introduced to the line-up as a co-located show, allowing visitors to experience the entire automation process from manufacturing to packaging. Automation World aims to continually spearhead industry development and to showcase the very best in diverse, emerging technology.

Exhibitors from 24 countries flew to Seoul to host their booths at Automation World, and the majority expressed their satisfaction with their participation at the show. In a post-show survey, 72% of respondents from overseas said they were able to meet face-to-face potential buyers during the fair. 59% of respondents said that the buyers they met were “highly” qualified, and a total of 87% were satisfied with the exhibition’s management. Most significantly, 89% of respondents said that they had either already confirmed or were highly considering participating in next year’s show.

To further foster Korean exports and help develop the domestic and global Automation Industry, Automation World 2013 included for the first time a tailored matchmaking program designed specifically for overseas buyers. A total of 61 business meetings between overseas buyers and domestic exhibitors were held, with each meeting coordinated according to the buyer’s needs and preferences. Exhibitors from overt 60 companies were involved in the meeting, with 80% of the buyers after expressing their complete satisfaction with the program. 100% of all buyers who participated in Automation World 2013 said that they were satisfied with the overall management of the show.

Automation World 2014 will take place at Coex with even more exhibitors and showcased products. Be sure to join the show in March 2014 to experience the best of what the global automation industry has to offer.

For more information about the Automation World visit http://www.automationworld.biz