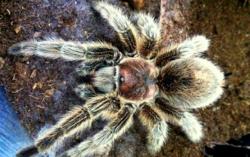 The finding of traces of mesothelioma is intriguing and may be able to help scientists understand the disease and help other sufferers through the debilitating disease.

As reported in The Independent, a strange discovery was found in a 19th Century house in Cardiff during renovation work. The skin that was shed from a Chilean Rose Tarantula was found covered in asbestos fibres, much to the surprise of asbestos removers Kusten Vorland.

Initially thinking the discovery was a live tarantula, the skin was found to be coated in asbestos and had traces of the deadly cancer mesothelioma. This is thought to be the first discovery of its kind and shows how the deadly asbestos fibres can affect animals as well as humans.

Asbestos Advice Helpline deal with hundreds of human sufferers of mesothelioma and other asbestos related diseases on an annual basis, but this startling discovery adds a more common fear factor to the dangers of asbestos. Even small spiders can create fear amongst people, but with the addition of asbestos exposure, the threat may be brought to more people’s attention.

It is unclear where the tarantula originally came from – whether it has escaped from a local breeder or if there are more of the spiders in the area, but the occurrence should not be ignored.

According to This Is South Wales, the original discovery was made by Katie Parson-Young who found the tarantula skin when lifting a floorboard in the house. When lighting was moved to the area, she saw the leg and instinctively ran out of the building. Katie said “I was the first in. I sort of saw a leg, screamed and went.”

She added “I was absolutely petrified and couldn’t stop shaking for two hours. It was just horrific. I hate spiders and I hate them even more now.”

The skin from the tarantula was taken to Cardiff Reptile Centre and identified. It was later analysed at a laboratory which found the coating of asbestos and traces of mesothelioma.

A representative from Asbestos Advice Helpline commented: “The regular asbestos removal process was interrupted by this strange finding, but it goes to show how the dangers of asbestos can affect everyone – human and animal.

“The finding of traces of mesothelioma is intriguing and may be able to help scientists understand the disease and help other sufferers through the debilitating disease.”

The tarantula in question is not dangerous in itself, with its sting being comparable to a bee or wasp, but with the added asbestos danger it should be avoided. If you think you have suffered from exposure to asbestos or have been diagnosed with an asbestos related disease get in touch with Asbestos Advice Helpline.