Recently voted the happiest place in Britain, Harrogate has had a record year for company formation and performed well in new national league tables released by Duport.co.uk. 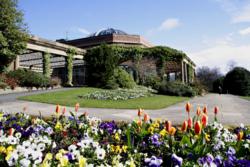 Harrogate has plenty to celebrate after a record 2012 for company formation... the future of Harrogate looks very bright indeed

The latest Duport Business Confidence Report for Harrogate shows that 2012 was a record year for company formation in the town. Could the a rise in business start-ups be linked to its recent placing at number one in Rightmove’s Happy At Home Index?

The positive results seen in Duport’s research point towards an economy that is doing well in spite of difficult economic conditions - which may have a bearing on the contentedness of its residents. The record number of new company formations suggests that business confidence is high in the town, and its place in the national league table for net company growth shows it is out-performing larger neighbours such as Sheffield and Leeds

“Harrogate has plenty to celebrate after a record 2012 for company formation and some impressive positions in our national league tables. I’m not surprised that it has been voted the country’s happiest town - if current trends continue, the future of Harrogate looks very bright indeed.”

The Duport Business Confidence Report for Harrogate contains a variety of data that can be used to gain an insight into the local business landscape. More information and statistics can be found at http://www.duport.co.uk/harrogate.