The Phoenician alphabet now brings a new dimension of interest to this year’s National Library Week. See details on the Santorini website. 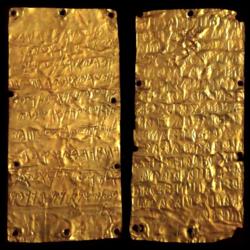 The Phoenician alphabet now brings a new dimension of interest to this year’s National Library Week. See details on the Santorini website.

All the books we read owe their origin to the Phoenician alphabet, and that intriguing fact now adds a new element to this year’s celebration of National Library Week across the USA on April 14-20. The Greeks and Romans modified those letters for their own use, then filled early libraries with spectacular writings in a tradition that continues today. And it all goes back to the beautiful characters of the Phoenician alphabet.

The fascinating story of how Phoenician sea-trade led to the widespread use of this alphabet is one of the themes wonderfully explored in the book "Phoenician Secrets," as summed up by author Sanford Holst. “This marriage of the alphabet to wealth-building was what made the new creation so incredibly popular. It was as if a bookish bride had married a wealthy trader and suddenly discovered she had many new friends. In this case, the bride was radiant, and she went on the arm of the Phoenician to every port and city in the known world.”

In honor of National Library Week, when readers finish “Phoenician Secrets” or some other book, they might consider donating it to a local library. That way they get to enjoy it once in their own hands, and again when it is put into the hands of a young person who wants to read and explore.

The American Library Association is leading the celebration of National Library Week, and this year’s honorary chair is Caroline Kennedy. The overall theme is “Communities matter @ your library,” and many local libraries are participating.

Santorini Publishing brought out “Phoenician Secrets” as part of its focus on new views of popular subjects in history and the modern world, and actively supports National Library Week.