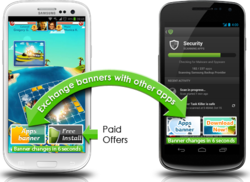 This is a real game changer for the mobile ad industry.

In the increasingly saturated world of apps, two dilemmas face developers, how to be seen and how to monetize their apps. This is where mobile ad network CyberBounty believes it has a solution, in the form of a hybrid platform giving developers the ability to exchange ad banners with each other by using a one-to-one mobile banner exchange, while cleverly building in a secondary banner to also generate revenue for the developers.

“Whenever we talked to developers the message was consistent, they want to monetize their apps, but critical to success they needed more installs. We already operated a highly successful mobile ad platform, so we thought why not take it one step further and develop the a hybrid mobile banner exchange combined with an ad serving platform, which could promote any category of app in any country. We achieved this by placing two banners side by side, one for the banner exchange and one for the advertisers in order to generate revenue for developers. A developer displays a banner in their app for another developers app, which earns them credits, they are then able to use those credits to promote their own app in other developers apps, all within a fully targeted environment. It made total sense, who wouldn’t want to promote their app without having to pay while also generating revenue, this is a real game changer for the mobile ad industry,” stated Brian Wickes, President of marketing for CyberBounty.

Integration is always a concern but with a simple cut and paste of as little as one line of code developers can breathe a sigh of relief that there’s literally no learning curve. Once the SDK is deployed it’s all controlled through an online control panel, developers can change the categories and countries where their banner is displayed. Space is certainly used well with the ability to set the banners to continuously rotate within the same space. For developers with apps on multiple platforms the ability to cross promote by generating ad credits on one platform such as their Android app, then using those credits to promote their iOS app will be highly appealing.

To further increase revenue CyberBounty also boasts of an optional, fully customizable, themed popup offer wall plug-in, which presents the end users with free downloads and advertisers offers, all of which generate extra revenue for the developer. Drop in GUI links and in-app image links to the offer wall are also a possibility. Developers can always keep tabs on performance by monitoring revenue and traffic in real-time.

As part of its launch celebration CyberBounty also announced their ‘app success’ competition where developers who sign up using the promo code ‘wincredits’ can win banner credits, including a grand prize of 500,000 credits to instantly boost their app to success.

About CyberBounty.com
Serving ads since 1998 Cyberbounty was one of the very first desktop, global affiliate networks. With a reputation for thinking ‘outside the box’, consistently producing innovative and effective solutions, with the latest launch of its hybrid mobile banner exchange and ad platform.