Set to open in April 2013, the new Roseville location will house the first Detroit Style Pizza Co. dine-in area and feature the sights, sounds and flavors of Detroit. 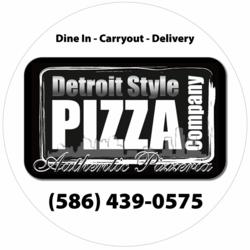 We're going to give our customers a family-friendly Detroit experience, so they can enjoy the sights and sounds of Detroit with fresh-baked Detroit Style Pizza.

Dine-in area to feature the sights, sounds and flavors of Detroit

Detroit Style Pizza Co. will serve three styles of pizza: Detroit Style, which has a thick crust and is deck oven-baked in well-seasoned square steel pans; Traditional Round Style, which features a selection of crust options; and Old Forge Style, a thin pizza made in the tradition of Pennsylvania's pizza capital of the world.

The pizzeria will also offer baked subs, breadsticks, salads, pastas, pepperoni rolls, meatballs, sweetsticks and cheesecake. Specialty pizzas such as the Margarita in the D, the Motor City Meatball and the Motown Meat Supreme will lend local Detroit flair to the menu, and gluten-free pizzas will also be available. In the future, Randazzo also plans to serve beverages from Detroit-based vendors such as Faygo and Town Club Soda.

Detroit Style Pizza Co. shreds its own brick and mozzarella cheeses, cooks and crumbles its own Applewood smoked bacon and Italian sausage, and uses only Five Star Romaine lettuce and the freshest in-season baby greens in its salads. Premium-quality ingredients are purchased fresh from local Detroit and Michigan producers whenever possible, and every pizza features Randazzo's own World Champion dough recipe and signature red sauce.