Wright & Schulte is representing a woman from Ohio in an Imprelis tree damage lawsuit, alleging that a number of the plaintiff’s trees were permanently damaged after a single application of Imprelis. 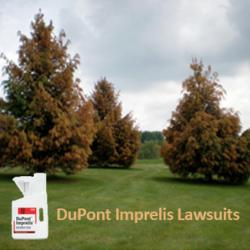 The attorneys at Wright & Schulte, LLC have filed an Imprelis tree damage lawsuit on behalf of a woman from Richfield, Ohio. This case (Case No. N13C­02­169 EMD) alleges that, after a single application of Imprelis herbicide, many of the plaintiff’s mature trees were irreversibly damaged. This Imprelis lawsuit also contends that DuPont mislead consumers in Imprelis advertising and that, even after consumers reported Imprelis damage, DuPont failed to acknowledge the dangers associated with its herbicide. This case was filed on Feb. 20th, 2013 and will be heard in the Superior Court of Delaware, New Castle County. As with previous Wright & Schulte Imprelis lawsuits, the defendant in this case has been identified as E.I. DuPont De Nemours and Co.

Wright & Schulte, LLC is experienced in defending the rights of those who have suffered Imprelis tree damages and tree loss after the use of this dangerous product. Our experienced Imprelis attorneys have a proven track record of successfully going up against large corporations. We urge individuals who have lost trees, shrubs and other plant life due to the application of Imprelis and feel that Duponts Imprelis class action settlement offer is insufficient, to speak with our Imprelis tree damage lawyers by visiting yourlegalhelp.com or by calling 1-800-399-0795.

Alleged Imprelis Tree Damage
DuPont initially marketed Imprelis as having considerable advantages over other herbicides on the market, stating that Imprelis was a safe and effective way to get rid of the roots and shoots of common, hard-to-kill weeds without presenting any negative impact on surrounding trees and plant life. In fact, advertising for Imprelis, which was first introduced in October 2010, stated that this herbicide was the “most advanced turf herbicide in over 40 years.”

However, lawn care professionals have described Imprelis, which is four times more powerful than Agent Orange, as the industry’s “Hurricane Katrina,” with the full extent of the damage DuPont’s Imprelis product has caused only just beginning to manifest itself. In fact, even after consumers began to report Imprelis tree damage to DuPont, the company denied that Imprelis herbicide was dangerous and tried to attribute the tree death to other factors, such as improper application of the herbicide.

Court documents for this case allege that the plaintiff contracted with a lawn care company that properly applied Imprelis (according to the manufacturer’s instructions) once to the plaintiff’s lawn in May 2011. Following the Imprelis application, the plaintiff began to notice significant damage to the trees on her property and contracted a certified arborist to inspect the damage in October 2011. At that time, the arborist found that at least seven of the plaintiff’s trees had severe damage that included browning, curling, twisting and tree death. The trees allegedly damaged included mature White Pines, Norway Spruce and Colorado Blue Spruce. While the complaint alleges that use of Imprelis herbicide was directly responsible for the serious damage wrecked on the plaintiff’s trees, it also contends that the plaintiff has yet to fully discover the extent of damage caused by Imprelis.

EPA Orders DuPont to Stop Selling Imprelis
As nationwide consumer reports of Imprelis tree damage began mounting, in June 2011, the EPA started its own investigation into the alleged dangers associated with Imprelis. By August 2011, the EPA had uncovered sufficient evidence that Imprelis was responsible for seriously damaging or killing thousands of trees and, as a result, ordered DuPont to immediately stop selling and distributing Imprelis herbicide. At that time, the EPA has received more than 7,000 reports of Imprelis tree damage from consumers nationwide. [http://www.epa.gov/compliance/resources/cases/civil/fifra/dupontimprelis.html