TDG: Social TV Use Triples in the Past 18 Months, Passes 10 Million Monthly Users

New report from TDG highlights the growth and current market for social TV. 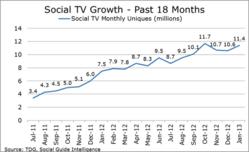 The use of social TV applications has tripled over the past 18 months and now represents more than 10 million monthly active users.

In a new report released by TDG, Social TV: Myths, Facts, and the Future, social TV use by American television viewers is forecast to grow significantly over the next seven years, driving major changes in the business landscape for television and online/Over-the-Top (OTT) video.

According to Joel Espelien, TDG Senior Analyst and author of the new report, “For many TV viewers, social TV is fundamentally altering the television experience, from a passive consumption medium to a new kind of community experience, in which millions of Americans gather around the digital water cooler to discuss TV shows in real-time as they watch programming.” TDG’s report forecasts that the number of viewers engaged in social TV activities will more than double by 2020, and will exercise an outsized influence over the rest of the TV viewing audience.

“The use of social TV applications has tripled over the past 18 months and now represents more than 10 million monthly active users. At the same time, the average social TV user has more than 500 followers on Twitter,” notes Espelien. “The combination of these factors gives social TV viewers an outsized influence that extends beyond social networks, as mainstream media repeat and amplify the reactions of social TV viewers for the rest of us.”

According to Espelien, the growing influence of social TV will create major new opportunities and challenges for content providers, TV networks, multichannel operators, and advertisers. “The entire value chain must adapt to a world in which the audience increasingly becomes part of the program.”

TDG’s new report reviews the key myths and facts about social TV, based on social TV viewing data collected during the past several months. The report provides metrics on the share of the TV audience currently engaged in social TV and forecasts the growth in social TV usage from 2013 to 2020.

This new report is available to TDG Members and may be purchased by contacting our Research Services Team at 469-287-8050. For more information, please visit http://www.tdgresearch.com.

About TDG Research:
TDG provides actionable intelligence on the quantum shifts impacting consumer technology and media behaviors. Since 2004, our market research and advisory services have helped technology vendors, media companies, and service providers understand how consumers access, navigate, distribute, and consume broadband media – whenever and wherever they may be. For more information, visit our website at http://www.tdgresearch.com.