The "Kovels on Antiques and Collectibles" April 2013 newsletter is both online and in the mail. Auctions of Midcentury Modern Cocktail Tables, Collectible Bottles and Trade Stimulators are reported—all with color photos, prices and marks. 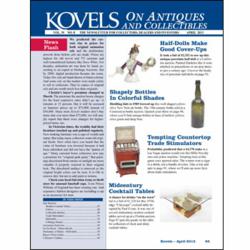 The April 2013 "Kovels on Antiques and Collectibles" newsletter is now available in print and online.

Midcentury modern cocktail tables from the 1950s and '60s with sleek lines and geometric shapes are featured in the just-published April 2013 issue of “Kovels on Antiques and Collectibles.” Tables made of glass, metals and wood, by or attributed to major designers, sold at a West Palm Beach Florida auction, where prices ranged from under $1,000 to over $40,000. Bottle collecting has been growing in popularity again and collectors are always on the hunt for interesting shapes and colors. See pictures and prices of antique soda, mineral water, ale and wine bottles in shades of mellow yellow, olive green and deep blue that sold at a Connecticut auction. Countertop gaming machines called "trade stimulators" tempted bidders' skill and luck at a Las Vegas auction. Kovels' newsletter antes up more information about trade stimulators, along with descriptions and selling prices.

Learn about painted ladies made of porcelain that were once stitched on fancy pincushions or attached to skirts that could cover pots of tea. Collectors call them half-dolls and more than 100 sold at a Maryland doll auction. Nineteenth-century cribbage boards are also featured, as well as firkins—small wooden buckets considered "folk art" by collectors—sold at a winter auction in Massachusetts.

Terry Kovel's granddaughter went "on the road" to review the Lincoln Road Market in Miami Beach. Auctioneer, Bill Morford, comments on what's happening in the world of advertising collectibles. Regular monthly features are here, too—April’s Dictionary of Marks lists marks on half-dolls and the Buyer’s Price Guide lists current prices of dozens of antiques and collectibles. The popular illustrated Collector’s Gallery has answers to readers’ questions about a cottage ware tea set, a Waterbury "Steamer" clock, an antique Wave Crest comb and brush case and a Buddy L toy convertible.

With its mixture of expert advice and reports on what’s hot in the market, Kovels’ newsletter has something to offer for both beginning and experienced collectors. “Kovels on Antiques and Collectibles” is available as a print subscription or as a digital downloadable version that is part of the Kovels.com Premium subscription.

About Kovels.com
The online website, Kovels.com, created by Terry Kovel and Kim Kovel, provides collectors and researchers with up-to-date and accurate information on antiques and collectibles. Kovels’ Antiques was founded in 1953 by Terry Kovel and her late husband, Ralph. Since then, Kovels’ Antiques has continually published some of America’s most popular books and articles about antiques, including the best-selling “Kovels’ Antiques and Collectibles Price Guide,” now in its 45th edition. The Kovels’ website, online since 1998, and free weekly email, “Kovels Komments,” give readers a bird's-eye view of the market through up-to-date news, auction reports, an online Price Guide, a Marks Dictionary, readers’ questions with Kovels’ answers and much more.