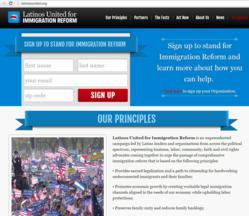 The NHLA unveiled its outreach and mobilization strategy for ensuring immigration reform along with its website LatinosUnited.org

Through our phone banks, online tools, town halls and other efforts, Congress will clearly know what key provisions the Latino community wants in the CIR legislation and the broad support for such reform.

The National Hispanic Leadership Agenda (NHLA), a coalition of the 34 preeminent Latino organizations in the nation, today announced its Latinos United for Immigration Reform campaign and launched LatinosUnited.org. The campaign will feature 60 townhalls across the nation in an unprecedented effort to mobilize Latinos in support of comprehensive immigration reform.

The assembled Latino leaders called on Congress to pass comprehensive immigration reform legislation that restructures our immigration system and includes NHLA’s immigration principles of family unity, due process and a pathway to citizenship.

"The 2012 elections saw greater Hispanic participation than ever before. It is past time that our elected leaders hear our voices and heed our call to action," said Hector Sanchez, chair of the National Hispanic Leadership Agenda. "The Latinos United for Immigration Reform campaign is the largest effort of its kind to organize our community. We will travel the country building a grassroots network that will ensure Congress hears our message loud and clear: fair, effective, comprehensive immigration reform before the August recess."

The Latinos United for Immigration Reform campaign will include:

“The groups in this coalition represent a wide variety of viewpoints, but we are united on what we believe should be the core principles of any comprehensive immigration reform package. Restoring the rule of law by creating a path to legalization and citizenship coupled with smart, humane enforcement; preserving the rule of law by creating workable legal immigration channels; and strengthening the fabric of America by promoting the successful integration of new immigrants. This is a message we will take to our community and in turn, they will take to their elected representatives,” said Janet Murguia, President and CEO, NCLR.

“Immigrants have always contributed to the fabric of this country and with comprehensive immigration reform we can ensure our prosperity through the continued contributions of the immigrant population. Through our phone banks, online tools, town halls and other efforts, Congress will clearly know what key provisions the Latino community wants in the CIR legislation and the broad support for such reform," said Brent Wilkes, LULAC National Executive Director.

"The record-breaking Latino electorate of last November was not a one-time phenomenon; those voters and future voters are watching carefully and taking action to ensure a meaningful immigration reform that reflects our nation's highest and most enduring values of fairness, family and prosperity," said Thomas A. Saenz, President and General Counsel of MALDEF.

"The National Latina Institute for Reproductive Health (NLIRH) is proud to join Latinos United for Immigration Reform to lift the voices of Latinas, their families, and their communities in support of humane and inclusive reforms to our immigration laws and policies. In solidarity with Latino communities across the country, Latinas and immigrant women will demand that immigration reform advances a roadmap to citizenship for the 11 million and recognizes the tremendous contributions of immigrant Latinas and families," said Jessica González -Rojas, Executive Director of the National Latina Institute for Reproductive Health.

"The demand for action from Latino voters is clear. Across cities and towns in our nation, there is a focus and sense of purpose around immigration reform unlike anything we've witnessed before in our community. We stand ready to seize this moment and make sure Congress passes an immigration reform bill this year focused on immigrant integration, family unity and a pathway to citizenship for our undocumented community," said José Calderón, President of the Hispanic Federation.

“Let's remember that the people who helped to build this country and make it great deserve a chance to experience the American Dream, as a just reward for their hard work. It's time for our leaders to lead and pass comprehensive immigration reform,” said Ignacio Salazar, President and CEO, SER-Jobs for Progress National, Inc.

Established in 1991, The National Hispanic Leadership Agenda (NHLA) brings together Hispanic leaders to establish policy priorities that address, and raise public awareness of, the major issues affecting the Latino community and the nation as a whole. For more information, please visit http://www.nationalhispanicleadership.org.