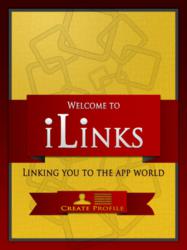 A new app for iPhone and iPad called iLinks automates the process of finding new apps, music and books in the iTunes store. iLinks is available in a free Lite version or paid $0.99 version.

First, the user is prompted to create a profile. The user’s profile only requires a name, but can incorporate information such as birth year, sex, email address, Facebook and Twitter accounts, school name and major, and employer and position.

The user can also document his or her interests to allow iLinks to make intelligent app choices on the user’s behalf. Categories of interests include hobbies, music, and books. The more information the user fills in, the more targeted recommendations are displayed under Apps, Music, and Books on the results page.

The user can modify the iLinks profile at any time, bringing up a new set of automatic results. There’s also a search function, so the user can find any app regardless of preferences. Once an app (or music album or digital book) is selected, the iTunes store is opened for the download.

iLinks was developed for 4M Development by Zco Corporation, one of the largest iPhone, iPad, Android, BlackBerry and Windows Phone developers in the world.