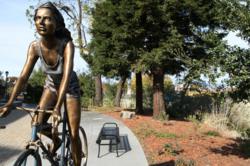 In an effort to reach Napa enthusiasts locally and online, DoNapa will be highlighting various art forms from locals and visitors with an Instagram photo contest.

In an effort to reach Napa enthusiasts locally and online, DoNapa will be highlighting various art forms from locals and visitors with an Instagram photo contest. Beginning April 1, 2013 and running the entire month, DoNapa Instagram followers will be asked to Instagram a photo of anything they find appealing to their artistic eye and use the hashtag #ArtsInApril and tag @DowntownNapa in the description. The photo with the most likes by April 30, 2013 at 9:00 p.m. PST will win an iPad Mini.

Arts in April Events:
Andaz Napa will be showing unique photography from former Rolling Stone head photographer Baron Wolman. Order up a cocktail and take in the priceless original images of musicians in action such as Bob Dylan, Janis Joplin, Jim Hendrix, Pink Floyd and many others.

Gordon Huether Gallery in Downtown Napa will be offering complimentary VIP Tasting for Two at Artesa Vineyards and Winery, where Huether’s work is featured, to anyone touring the gallery during April. For more information, contact (707) 255-2133.

The Inn on First is offering a special during Arts in April. Stay any two nights and get a third night, Sunday through Thursday, for $99. To reserve a room and special offer, call (707) 253-1331.

The Meritage Resort and Spa is offering an “Art of Relaxation” package for guests to stay and enjoy the art scene. Upon arriving, guests will find a bottle of sparkling wine and spa gift waiting in their superior guest room or suite. Turn down service is complementarily each night. Late checkout is also available until 2 p.m. Guests will also receive two 50-minute treatments at Spa Terra where you can choose either a Terra massage or European Facial. If you’re feeling artsy, acrylic paint sets are available to paint in the hill side vineyard. To book your stay at The Meritage Resort and Spa, call (866) 370-6272.

Live music will be heard throughout Downtown Napa during the whole month. Some of the music events include the following:

Launching April 24, 2013, the Downtown Napa Association will host DoNapa Wednesdays, as various businesses in Downtown Napa will feature a variety of specials. Restaurants participating include, but are not limited to, the following: Celadon, Frati Gelato Cafe, Morimoto Napa, Napa General Store, The Pear, Silo’s and Sweetie Pies Bakery.

DoNapa’s Culinary Crawl, which takes place every other month, will celebrate the arts on April 25, 2013 from 5 – 9 p.m. with an “Arts in April” theme. The featured stops along the crawl include Napa General Store, Gordon Huether Gallery with food and wine from Tarla and Bounty Hunter Smokin’ BBQ and Wine Bar. Proceeds from the event will be donated to Arts Council Napa Valley. To register for the event, visit DoNapa.com.

Back Room Wines will be hosting an exhibit from David Mahaffey of his wine and photo collection throughout April. His collection, “Favorite Photos from Forty Years of Collecting,” features works from Ansel Adams, George Tice and Keith Carter, among others. On April 26, 2013, from 5 – 8 p.m., David Mahaffey will be on site to release 2012 Miss Olivia Brion wines, including Chardonnay, Pinot Noir and Rose of Cabernet. The event is free to attend and tastings will be $5 per person.

The Napa Tourism Improvement District and Downtown Napa Association have been supporters of the arts and the Arts Council Napa Valley, participating in Arts in April year after year, along with other programs specific to Napa including the Napa ARTwalk and Art on F1rst.

For more information about Napa and where to book your stay while in town for Arts in April, visit http://www.DoNapa.com.

About Visiting Napa
Napa is a premier destination in the Napa Valley offering a food and wine experience unlike any other. Downtown Napa is the only area of the Napa Valley that brings together over 70 restaurants, 20 plus wine tasting rooms, more than 40 hotels and picturesque bed and breakfasts, nightlife and activities all within walking distance. Napa engages visitors and locals alike with a vibrant downtown district and a variety of events including the Culinary Crawl, Main Street Reunion, Blues, Brews & BBQ, Chefs’ Market, free concerts at Veterans Park, Art Walk and more. A calendar of events, maps and itineraries are available at DoNapa.com. Follow Downtown Napa on Twitter at @NapaDowntown and “like” downtown on Facebook at http://facebook.com/downtownnapa.