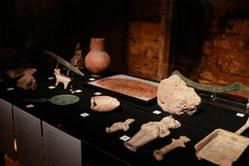 Some rare artifacts from biblical times found their way to present-day New York City last week, arriving from Liberty University’s Center for Judaic Studies to help celebrate the upcoming DVD release of the popular History Channel miniseries “The Bible” and coinciding with the opening night of The Bible Experience, a free interactive display of rare biblical artifacts, on Tuesday, March 19, at 450 W. 14th St. in Manhattan.

Liberty University professor Dr. Randall Price, executive director of the center and a leading authority on biblical archaeology, personally obtained the artifacts and attended the event. He helped explain the items, which ranged from a basket that would have been similar to the one Moses was found in as a baby, to a sword from the time of Joshua, a brick from the walls of Jericho, a knife from the time of Abraham, a slingshot from the time of David, crucifixion nails, oil lamps, and several pottery pieces. The exhibit ends on Wednesday and the items will return to Liberty.

The exhibit also included several items from the Green Collection, the largest private collection of biblical manuscripts and artifacts in the world.

Chancellor Jerry Falwell, Jr. was scheduled to attend the event, but changed his plans to see the men’s basketball team in the first round of the NCAA Tournament in Dayton, Ohio.

The gala was hosted by “The Bible” producers Mark Burnett (creator of reality TV hits “Survivor” and “The Voice”) and his wife, actress Roma Downey (“Touched By an Angel”). Price had a chance to meet them, as well as members of the cast and other television and film celebrities, including Montel Williams, Olympic gymnast Gabby Douglas, and actress Della Reese.

Price said it was thrilling to be a part of the gala, which was held in dramatic fashion, featuring a two-ton hanging crown of thorns and breathtaking photography from the film, and to see so much attention being given to the Gospel.

“It was very exciting to go up and down Fifth Avenue and see big posters for ‘The Bible.’ If nothing else the word ‘The Bible’ will remind a lot of New Yorkers about the Bible and (that) it’s still important,” he said.

Price said the production quality of the 10-hour docudrama, which concludes on Sunday, is “first-rate.”

“They are clearly taking things in a historical matter, not implying it is (just) a story,” he said.

He added another reason for the series’ success is evangelical viewers who are tuning in to watch a story they know and love presented at such a high quality.

“We are at the risk of being marginalized in this culture, so we need to rally and stand behind efforts that support the Bible in a credible and historical way,” Price said.

Liberty University students were among the first to view some never-before-aired clips of “The Bible” during the annual Easter Communion service in the Vines Center last week. A representative from the show also brought behind-the-scenes footage for Liberty’s cinematic arts students to view.

Scotty Curlee, Assistant Professor at Liberty’s Cinematic Arts, Zaki Gordon Center, said students were excited to have the opportunity to see the making of such a popular show. "The Bible" has broken ratings records, with its premiere drawing over 13 million viewers to make it the most-watched cable entertainment series of 2013.

"Mark and Roma are industry trendsetters, and now with ‘The Bible’ series, are paving the way for the next generation of Christian filmmakers in the mainstream media,” Curlee said. “The cinematic arts students have the rare privilege of viewing exclusive clips and hearing the passion behind ‘The Bible’ series ... the same passion that student filmmakers will take into the future to influence the world in a positive direction."

The artifacts included in the exhibit, and many more, can be viewed at the Center for Judaic Studies located in Arthur S. DeMoss Learning Center. For hours and information on tours, visit http://www.Liberty.edu/Judaicstudies.