Bigge Crane and Rigging just keeps on growing. Bigge has recently added over 100 new cranes to its nationwide rental fleet, at a cost of over sixty million dollars. Every one of these cranes is new and ready to be leased. Some of the highlights include 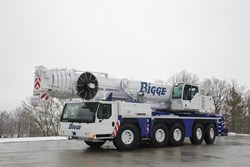 Bigge Crane and Rigging just keeps on growing. Bigge has recently added over 100 new cranes to its nationwide rental fleet, at a cost of over sixty million dollars. Every one of these cranes is new and ready to be leased. Some of the highlights include

Terex Quadstar 1100, RT 780, 670, 555, 345 and HC275 – Bigge affirmed its position as the world’s largest Terex crane dealer by purchasing nearly 50 new Terex rough-terrain cranes ranging from capacities of 45 to 110 tons. These 2013 machines are all Tier IV rated and completely redesigned. Also in the mix were a number of Terex American HC275 crawler cranes, each with a 275 ton capacity. Terex cranes anchor our fleet nationwide, and these cranes are available from all of our locations.

Liebherr LR 1300SX and Liebherr LTM1220 – Bigge just bought six Liebherr LR1300SX cranes, the best-in-class 300 ton capacity crawler crane. These new cranes round out close to two dozen of this model in the Bigge fleet, preferred because its luffing jib is 20-40% bigger than any other in its class. Available from all of Bigge’s 13 locations, Bigge has the full kit for this crane available from its hubs in Houston, San Leandro, Los Angeles, and Richmond, VA. In addition, Bigge has added three five-axle LTM1220 all-terrain cranes.

Grove RT9150, RT9130, RT890E, Grove GMK6350 – Bigge has also added a significant quantity of these larger RTs that have been exploding in popularity, from the 90-ton capacity RT890E to the 150-ton capacity RT9150. The RT9150 has the largest lift capacity for any rough terrain crane anywhere. With 197 feet of main boom and a 69 foot fixed jib, it has the reach and capacity of a 165 ton class all-terrain crane in the footprint of a two axle rough terrain. Also from Grove, Bigge recently purchased two six-axle GMK6350 all-terrain cranes. Rated at a 350 ton capacity, the GMK6350 stands out because of its best-in-class chart and operating characteristics.

Bigge’s crane rental fleet has more than 400 machines, available for both bare lease and operated and maintained rentals. Bigge provides all our customers with dedicated project managers, factory trained technicians, and field support, and has a nationwide, strategic network of service locations. Bigge operates and bare leases cranes on a nationwide basis out of locations in nine U.S. states, from California to Virginia.