Wise Fool, a non-profit theater arts group located in Santa Fe, NM presents the premier of SeeSaw, their newest acrobatic, dance and aerial performance. The outdoor spectacle debuts at the Santa Fe Railyard Park with three free performances on Friday, May 3rd at 8pm and Saturday May 4th at 1pm and 8pm. 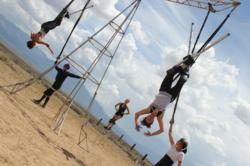 “The issues of migration and immigration are personally and socially pervasive,” said Amy Christian, Artistic Director of Wise Fool New Mexico. “The SeeSaw performance strives to do justice to this politically charged subject."

Wise Fool New Mexico announces the world premiere of SeeSaw, a visually rich and physically dynamic communal arts experience combining acrobatics, dance and aerial performance. SeeSaw debuts at the Santa Fe Railyard Park on Friday, May 3rd at 8pm and on Saturday, May 4th at 1pm and 8pm.

SeeSaw combines daring physical dexterity with visual splendor in a 30-minute performance that articulates a timely story of migration, displacement, and the reclamation of “home.” Striving to bring thought-provoking art into daily life, the performance examines interactions between the masses of the displaced and the forces of nativism as it explores the power dynamics that exist at points of contact. SeeSaw performers embody cultural contradictions while lyrically navigating a difficult performance stage. With physical feats of daring and inspiration, performers fly, jump, climb and tumble in an effort to illustrate resiliency, adaptation, collective creativity, and mutuality.

“The issues of migration and immigration are personally and socially pervasive,” said Amy Christian, Artistic Director of Wise Fool New Mexico. “SeeSaw strives to do justice to this politically charged subject by creating a performance that is an enticing entryway to the exploration of meaningful change.”

SeeSaw is a multi-ethnic collaboration between Wise Fool and local visual artists, DJs, large-scale sculptors, and choreographers all with their own unique vision and personal perspective. Production began in the winter of 2011 and drew input from community experiences of migration, diaspora, displacement, colonization, and social stigmas. Working in intensive sessions, the creative team combined their expertise in theme and script development, kinetic sculpting, aerial, dance and acrobatic choreography, costuming, visual art, and original music composition.

PERFORMANCE INFORMATION:
World Premiere at the Railyard Park in Santa Fe, NM
Friday, May 3rd at 8pm
Saturday, May 4th at 1pm and 8pm
All Performances are FREE to the public—donations gratefully accepted.

ABOUT WISE FOOL NEW MEXICO:
Wise Fool New Mexico is a non-profit theatre arts project whose mission is to ignite imagination, build community and promote social justice through performances and hands on experiences in the arts of circus, puppetry and theater. Since 1998, the company has been performing original, multi-disciplinary works incorporating circus arts, physical theater and visual splendor throughout New Mexico and beyond. They have toured their first outoor spectacle production to 13 states, visting all major regions of the US as well as Canada. Their work has been called entrancing, exhilarating and ludicrously gifted… “calling to mind the best of Bread and Puppet, Mummenschantz and Teatro – with all the political awareness of Guillermo Gomez Peña.” http://www.wisefoolnewmexico.org

ABOUT THE PERFORMANCE:
SeeSaw was made possible through funding from generous private donors as well as the Santa Fe Arts Commission, National Endowment for the Arts, The McCune Foundation, New Mexico Arts, a division of the Department of Cultural Affairs, and The Just Woke Up Fund from the Santa Fe Community Foundation.