As the San Francisco tour season approaches, Tower Tours - San Francisco's Premier Sightseeing Tour Specialist - has released its 2013 Summer Edition of its bi-annually produced brochure prints. This edition highlights the new tour services and products for the months of April through October. 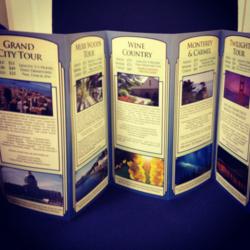 As of April 1st, 2013 the Summer Edition of bus sightseeing specialist Tower Tours brochure will be available! Over 100,000 copies have been printed for distribution within the San Francisco and surrounding California regions. Requests have been made by travel agents from all over the world!

The 2013 Summer Edition features an array of tour products and packages. Starting off with Tower Tours flagship tour product, The Grand City Tour, guests discover the breathtaking city of San Francisco as knowledgeable tour guides share the history of such valuable landmarks as Chinatown, Fisherman’s Wharf, North Beach, the Palace of Fine Arts, Union Square, Nob Hill, and the Presidio National Park. Opportunities to capture timeless photos of the Golden Gate Park, the Golden Gate Bridge, and Twin Peaks are also included in The Grand City Tour, available daily at 9:00am, 11:00am and 2:00pm. The Grand City Tour is 3 1/2 hours in length.

Next in line is the Muir Woods Tour, where guests venture north over the Golden Gate Bridge to an isolated canyon filled with ancient coastal redwood trees, known as the Muir Woods National Monument. Just when you can't savor enough of California's wildlife and beauty, the tour proceeds to Sausalito, a Mediterranean-like village harbored across the San Francisco Bay, famous for its sweeping views and sophistication. Starting April 15th, the Muir Woods Tour will be available daily at 9:00am, 11:00am, and 2:00pm. The Muir Woods Tour spends up to 90 minutes in the park, for a total tour time of 3 1/2 hours!

Tower Tours is also known for the Napa and Sonoma Wine Country Tour, where guests unwind and soak up the stunning scenery of Napa and Sonoma Valley, two of the most prized wine regions of Northern California. During this tour adventure, guests receive complimentary wine tasting and three exquisite estate tours, a scenic drive over the Golden Gate Bridge, and the sights of Sonoma Square or Yountville’s Vintage 1870 Marketplace for lunch. The Napa and Sonoma Wine Country Tour is available daily and is approximately 9 hours in length.

The Monterey and Carmel Tour is yet another stunning tour experience, as guests travel down California’s rugged coast, otherwise known as Highway 1. This gorgeous drive affords one amazing view after another. On this tour, such sights as the 17 Mile Drive, Mission Carmel, Carmel by the Sea, Pacific Grove, Pebble Beach, Seal Rock, Lone Cypress, Cannery Row, and Silicon Valley are highlighted throughout the tour. Starting in April, the Monterey and Carmel Tour is available on Mondays, Wednesdays, Fridays, and Saturdays and lasts approximately 11 hours in length.

Seasonally, Tower Tours also operates a Yosemite by Day Tour, so guests experience the Yosemite National Park, often referred to as the "Crown Jewel" of the National Park system - all in one day! Starting mid-May, the Yosemite Tour is available on Mondays, Wednesdays and Fridays.

A special treat has been added to the newest seasonal tour on the lineup - the Twilight Evening Tour, which now features The Bay Lights! Starting May 16th, guests will enjoy an unforgettable night tour of San Francisco, traveling from the Golden Gate Bridge through the Fillmore district and Cow Hollow, all the way to Treasure Island!

Tower Tours has been guiding guests since 1991. Many more tours have been added since its early days of operation. Now, each bus tour can be combined with Alcatraz, the Aquarium of the Bay at Pier 39, the California Academy of Sciences at the Golden Gate Park, the Golden Gate Bay Cruise of Red & White Fleet, the Sausalito Ferry of Blue & Gold Fleet, the Monterey Bay Aquarium and the famous Wax Museum at Fisherman's Wharf!

Contact Tower Tours today and request your copy of the 2013 Summer Brochure Edition!