Tampa’s Museum of Science & Industry has chosen their 2013 honoree for the National Hispanic Scientist of the Year, Dr. Raúl Cuero, Ph.D., renowned inventor and president/research director of the International Park of Creativity in Bogota, Colombia. 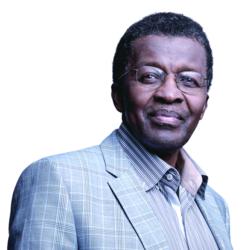 Cuero’s background directly ties into our mission and core ideology of making science real and demonstrates MOSI’s core values on the power of S.T.E.M. education for our youth.

Tampa’s Museum of Science & Industry, along with presenting sponsor Bright House Networks, has chosen their 2013 honoree for the National Hispanic Scientist of the Year, Dr. Raúl Cuero, Ph.D., renowned inventor and president/research director of the International Park of Creativity in Bogota, Colombia.

Cuero’s work has been renowned in the field of biotechnology. As a research scientist and Distinguished Professor of Texas A&M University, he developed six inventions, and in 2008 received recognition for these inventions. As a NASA Scientific Research Collaborator in Astrobiology and Biogenesis, he developed two inventions, one being the discovery of a natural molecule to protect the skin from the effects of UV radiation that lead to skin cancer. This technology will protect astronauts from the effects of UV rays, and in 2012, earned Dr. Cuero a new technology award from NASA.

Dr. Cuero was born in Buenaventura, Colombia, where during the 1950s, more than 30 percent of the children in his hometown died from diseases such as parasites, malaria, tuberculosis and viral diseases before reaching the age of 10. This served as the inspiration for his career. He has a Bachelor degree from the University of Heidelberg (Ohio, USA), a Master of Science degree in Plant Pathology from Ohio State University, where he studied under academic scholarship and a Ph.D. in Microbiology at the University of Strathclyde in the United Kingdom. He also received a scholarship award for his inventions when he was a student there. During the pursuit of his Ph.D., he developed an invention related to containment for solid state fermentation.

During his professional career, Dr. Cuero was one of the first scientists to go to China and South Africa to lecture on biotechnology in 1986. He has been published in more than 110 scientific journals in the fields of biology, microbiology, molecular biology and synthetic biology. He has received an Honorary Doctorate of Science from the University of Antioquia, Colombia, for his scientific contributions and an Honorary Doctorate in Humanities from the University of Caldas, Colombia, for his scientific contributions that benefit society. He has received the title of Commander granted by the Mayor of Manizales, thanks to his contributions to the city of Manizales and for the development of young scientists and inventors. He also received the 2012 Colombian Leadership Award for outstanding performance in science and technology. Dr. Cuero was the 2011 Keynote speaker at the World DNA and Genome Congress, as well as the keynote speaker on biochips and biosensors at the world congress on molecular medicine in China in 2012.

Dr. Cuero is also the founder, president, and research director of the International Park of Creativity (IPOC). IPOC’s objectives are to create young inventors under the mentorship of inventors, to create and/or invent new technologies and products for global markets, implement scientific research and developments for diverse industries and/or other institutions seeking new technologies and products for a competitive global market, and to be a “Think Tank” center for economic, social, scientific and technological development.

“It’s an honor for MOSI to present this award to Cuero,” said Wit Ostrenko, MOSI president. “As the Director of the International Park of Creativity, we feel Cuero’s background directly ties into our mission and core ideology of making science real and demonstrates MOSI’s core values on the power of S.T.E.M. education for our youth.”

For the past 11 years, MOSI has recognized nationally distinguished Hispanic science and engineering professionals to serve as role models and mentors for Tampa Bay’s Hispanic youth.
Past honorees include a former U.S. Surgeon General, a Nobel Laureate of Chemistry, a NASA astronaut, a marine biologist, a Harvard professor of pathology and former chief of immunogenetics at Dana-Farber Cancer Institute, a seismologist and former director of the Carnegie Academy for Science Education (CASE), Washington, D.C., an industrial engineer and the first Hispanic to serve as acting head of the Engineering Directorate at the National Science Foundation (NSF), a molecular biologist and founding member of the Society for the Advancement of Chicanos and Native Americans in Science (SACNAS), the chair of the Nuclear Regulatory Commission, the Director and Chief Executive of the U.S. Department of Energy’s National Renewable Energy Laboratory, the Director of the Smithsonian Institution’s National Museum of Natural History, and most recently the Director of the National Institute on Drug Abuse at the National Institutes of Health.

MOSI will present this year’s National Hispanic Scientist of the Year Award to Cuero during a gala award ceremony on Saturday, Oct. 12. Additionally, MOSI will hold a S.T.E.M. Professional Leadership Forum luncheon on Thursday, Oct. 10 to promote the exchange of ideas in relation to S.T.E.M. education as it directly correlates to the National Hispanic Scientist of the Year.

The original development of the award was prompted in 2000 when statistics showed an alarmingly high dropout rate for Hispanic students. Department of Education research shows that Hispanics are more likely to drop out of high school than any other ethnic group in the U.S. According to the National Center for Education Statistics, the 2008 dropout rate for Hispanic students was 18.3% compared to 9.9% for African Americans and 4.8% for Caucasians.

In an effort to combat this type of disparity in the Hispanic community, proceeds from the event help provide more than 1,300 students from underserved communities and low-income schools an exciting day of mentoring with Dr. Cuero and access to over 450 MOSI hands-on exhibits during Meet the Hispanic Scientist Day, which will take place on Friday, Oct. 11. Event proceeds also help to fund MOSI’s YES! Team, an educational enrichment and vocational training program designed to help at-risk youth develop and progress in a supportive peer-group environment.

About MOSI (Museum of Science & Industry)
MOSI is a not-for-profit, community-based institution and educational resource dedicated to advancing public interest, knowledge, and understanding of science, industry, and technology. With a total size of over 400,000 square feet, MOSI is the largest science center in the southeastern United States, and home to the only IMAX® Dome Theatre in the state of Florida. Kids In Charge! The Children’s Science Center at MOSI is the largest children’s science center in the nation. Disasterville, featuring Bay News 9 WeatherQuest, combines education and 10,000 square feet of interactive exhibits on the science behind natural disasters. MOSI’s newest permanent exhibition, The Amazing You, presented by MetLife Foundation and sponsored by Blue Cross and Blue Shield of Florida, explores the fascinating world of birth through end-of-life. Conquer your fears and experience an adrenaline rush like no other on MOSI’s permanent attractions, the Sky Trail® Ropes Course and Zip Line. Also, guests can now Dream it – Make it – Do it in MOSI’s technology playground & inventor’s studio, Idea Zone. MOSI is the proud winner of the 2009 National Medal for Museums by the Institute of Museum and Library Services, the nation’s highest honor for museums. For more information on MOSI, visit http://www.mosi.org.