Not only does Indian Mountain School turn out successful students, we also nurture prize-winning plants and award-winning teachers. What a great place to learn (and grow)! 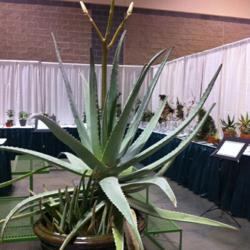 An aloe plant raised at IMS won first place in the Succulent and Cactus division in the CT State Flower Show and also won the Flower Show Award of Merit as a top specimen. Science teacher Kitty Hickox, who entered the plant in the show in February, also took home top awards in the Artisitc Crafts Division for her hand-made creations.

The winning Aloe succotrina was transplanted to the IMS greenhouse by Mike Brown about 10 years ago. Mike said he was nothing more than a steward to the off-shoot that he tended until his retirement last year. Kitty took over the TLC and noted that the plant, known for its healing properties, had the potential to be a winner. “I started preparing the plant to show about six months ago, trimming dead leaves, using tweezers to remove dead bits here and there, and finally cleaning imperfections from the leaves using alcohol swabs,” she said.

Kitty protected the blossom from the cold with a paper bag, wheeled it to the curb, and slid it into her station wagon. The plant was then delivered to the Connecticut Convention Center loading dock and placed in the show. “One of the judges commented that it was one of the finest aloe plants they had ever seen,” said Kitty. Blossoms on aloe plants, on the East Coast, are extremely unusual. This one was a winner, and the show committee was ecstatic about the entry.

The plant won best in the entire cactus and succulent division, and then it was also awarded a Flower Show Award of Merit, which is given at the judges’ discretion, when the winning plant scores a 95 or above and is a specimen of distinction.

In addition to the horticulture award, Kitty also earned a first, second, and third place award in three classes of the Artistic Crafts Division. Artistic crafts require a designer to create an object based on a predetermined theme, using only dried plant material. The show theme for the CT Flower Show was weddings, "Love in Bloom."

Kitty entered and won prizes for her designs in the three Artistic Crafts classes:

1.) Wedding Cake: Kitty took a first place or blue ribbon in the category where the judge's comments were that "Simplicity of design and creative use of elements add to overall harmony."

What’s in a Wedding Cake?
The materials Kitty used in her original creations include:

Wedding Cake
Korean Black Beans
Kelp
The cake is covered with kelp
and the orchids are fashioned out of kelp.
The branch is kiwi branch
Paints are gesso and acrylic paints