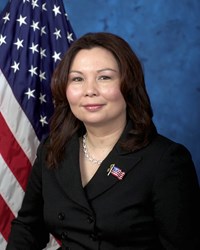 The EB15 BlastPLG® earplugs are a revolutionary product designed for warfighters who want to maintain natural hearing and situational awareness while protecting their ears from impulse and continuous loud noises.

Tammy Duckworth, United States Representative from Illinois' 8th congressional district, which includes Elk Grove Village, will visit Etymotic Research on Friday March 29, 2013. She is the first Asian-American woman elected to Congress from Illinois, the first disabled woman to be elected to the U.S. House of Representatives, and the first member of Congress born in Thailand.

Representative Duckworth was invited to Etymotic to learn more about Etymotic’s EB15 BlastPLG® electronic earplugs, a revolutionary product designed for warfighters who want to maintain natural hearing and situational awareness while protecting their ears from impulse and continuous loud noises like gunfire, explosions, vehicles and machinery.

An Iraq War veteran, Representative Duckworth served as a U.S. Army helicopter pilot and suffered severe combat wounds, losing both of her legs and damaging her right arm. She was the first female double amputee from the war. She continues to serve as a Lieutenant Colonel in the Illinois Army National Guard along with her husband, Major Bryan W. Bowlsbey, a signal officer and fellow Iraq War veteran.

Etymotic Research leads the way through all of its company initiatives to educate, advocate, protect, enhance and provide enjoyment of the listening experience for consumers at all ages. For more information about Etymotic, its hearing wellness mission and its products, please visit http://www.etymotic.com.