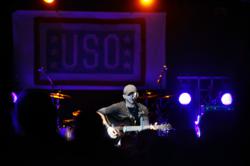 "My first USO tour was a humbling experience. Being able to spend time with the men and women who serve our country meant so much to me. - Brantley Gilbert

Troops and military families stationed at Aviano Air Base in Italy recently gathered to spend some quality time together at a USO concert featuring one of today’s hottest country music artists Brantley Gilbert. Gilbert, a USO first-timer and reigning Academy of Country Music (ACM) New Male Vocalist of the Year, saw hundreds of troops and military families in Italy before heading out to perform three more USO shows for troops stationed in Kuwait.

While the country music singer/songwriter is hoping to take home the fan based 2013 ACM award for New Artist of the Year, nothing compares to being able to show his support of troops and their families.

Quote:
Attributed to Brantley Gilbert:
“My first USO tour was a humbling experience. Being able to spend time with the men and women who serve our country and their families meant so much to me. And knowing that I was able to take their minds off all the things they are missing back home, even if just for a few hours, is something that means a lot to me.”

Entertainment tours are one of the many ways the USO helps to lift the spirits of our troops and military families. In 2012, the USO deployed 91 celebrity entertainers on 87 tours to 24 countries and 13 states, entertaining more than 324,000 troops and military families. Fifteen of these tours were to a combat zone. To find out more about the USO and how you can help, visit us online at http://www.uso.org

The USO lifts the spirits of America¹s troops and their families millions of times each year at hundreds of places worldwide. We provide a touch of home through centers at airports and military bases in the U.S. and abroad, top quality entertainment and innovative programs and services. We also provide critical support to those who need us most, including forward-deployed troops, military families, wounded warriors and families of the fallen. The USO is a private, non-profit organization, not a government agency. Our programs and services are made possible by the American people, support of our corporate partners and the dedication of our volunteers and staff.

Twitter Pitch: @BrantleyGilbert shows his support for troops with @the_USO tour to Italy and Kuwait