After rock band Mumford and Sons announced their North American summer tour, the online ticketing company, Coast to Coast Tickets has announced they would be offering these sought-after tickets to fans. 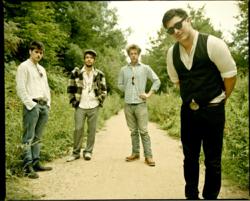 The new Mumford and Sons tour will feature some of the group’s greatest hits from their career as well as a number of songs from their upcoming 2014 record.

After Grammy Award winning rock group Mumford and Sons announced their new tour would kick off this summer, Coast To Coast Tickets quickly revealed they would be offering Mumford and Son tickets to fans looking to see the rockers perform live. The new tour will take the group across North America and will kick off this May 21st in Calgary and will include two multiple-night residencies as well as stops in festivals such as the Bonnaroo Music and Arts Festival. The tour will keep the band on the road through September where the jaunt will wrap up in St. Augustine, FL, and now tickets to see the group perform live are being offered directly through Coast to Coast Tickets.

The new Mumford and Sons tour will feature some of the group’s greatest hits from their career as well as a number of songs from their upcoming 2014 record. The tour will be taking the band to some of the biggest arenas in North America, and the newly announced event is already expected to sell out in most cities it visits. Coast to Coast tickets is announcing their sale of these Mumford and Sons tickets in hopes that fans, eager to see the group take the stage live will be able to get their seats before tickets sell out. Pre-sales for the tour went on sale March 25th while the regular event tickets will go on sale April 5th.

Those who are looking to get the best seats in the house to this highly anticipated tour will want to get their Mumford and Sons concert tickets now before the shows sell out. Tickets are currently available to the public at CoastToCoastTickets.com.

To find out more about getting your Mumford and Sons concert tickets, and seats to some of the biggest tours in music, visit: http://www.coasttocoasttickets.com.