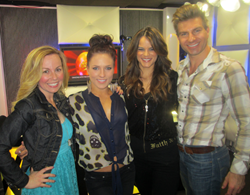 Andy and I had a serious meltdown moment. It was 7 or 8 days into our rehearsal period...He was fighting against me all of the time.

On Transitioning from the DWTS Troupe to Pro
Sharna says "I think it happened so fast. I found out and two days later I was meeting Andy [Dick]. I haven't really had time to think about it or get overly excited about it or worry about it which I think is a great thing--just keep it moving. I'm excited. It's been amazing. I'm absolutely honored to be a part of that cast with all of those amazing dancers."

On Andy Dick's Tabloid History
Sharna says "A lot of people said to me 'Ooo, Andy Dick did you hear about this story?' I was like 'One more time, he did what now?' We had our first meeting which was a part of what they showed Monday night. I was so touched by this guy that was really broken and sad by all of these mistakes that he's made and these things he wanted to change. Then I hear all of these wild stories about [Andy]. It's kind of crazy I just can't see [Andy] doing those things anymore. I think he's in a great place. He's finally moving forward with his life."

On Andy Dick's Rehearsal Breakdown
Sharna says "[Andy and I] had a serious meltdown moment. It was 7 or 8 days into our rehearsal period...He was fighting against me all of the time. He was just a different person. Eventually we have this meltdown moment. It comes out that he was just crumbling under his own fear. He was looking for someone to blame essentially, and he was trying to blame it on me. Trying to blame it on that it wasn't a male teacher, trying to blame it on all of these different things why he wasn't remembering his steps. Finally, he realized it's his own fear that's stopping him. He's frightened of failing in front of America. He's frightened of being the fool on national television again. He wants to do a good job. It is hard. He's frightened for his sobriety. He wants to fight and do everything right. He puts so much pressure on himself for that."

AfterBuzz TV's Dancing With The Stars aftershow airs live Sunday nights at 9pm PT and is available for download the next day on iTunes and YouTube. The Dancing With The Stars aftershow is a weekly wrap up show that broadcasts worldwide from Los Angeles, CA as part of Extra's Maria Menounos and filmmaker Keven Undergaro's online broadcast network, AfterBuzz TV. AfterBuzz is dedicated to producing daily post-game wrap-up shows for fans' favorite TV shows, covering shows like The Following, American Idol, WWE Monday Night Raw, House of Cards and countless others. Currently, AfterBuzz TV receives over 20 million weekly downloads on iTunes from over 75 countries. For further information about the network, visit afterbuzztv.com