Dallas/Fort Worth native singer songwriter, Heather McCready, puts a new face on the word "bipolar." In a compelling video interview with Dallas Morning News music critic, Mario Tarradell, Heather talks about overcoming stigmas, her music and the controversial treatment that saved her life. 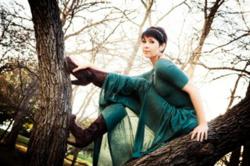 Heather MccCready has a uniqueness is her signature peaceful, style and whimsical voice.

In 2009 folk singer and songwriter, Heather McCready released her third CD in three years, "Give it a Day". As it is represented in the music video, the title song is a whimsical, and contagiously happy, lighthearted tune with a much deeper message of hope and survival hidden well beneath the surface. In a recent video interview for the "Dallas Morning News" with music critic, Mario Tarradell, Heather makes an unusual decision and not only takes time talking about the new release of her uplifting fifth CD entitled, "Bluebirdy", but with captivating vulnerability opens up and speaks about her very personal battle with bipolar disorder. It is interesting to hear about the very sad loss of two of her dearest family members to suicide and how that tragedy sparked a fire within her to speak out. It has become her deepest desire to be a voice of hope and perhaps a put a new face to contrast the disturbing images often seen in the media today representing tragically untreated victims of mental illnesses. With the obvious rise in mental health related tragedies, maybe Heather McCready is just what we need in the year 2013 to get the conversation started. A new face, and an accomplished, creative, empathetic woman who is brave enough to voice this much needed, but oftentimes controversial message, may well be what our national media needs to change the current perceptions and break down the wall of stigmas that still prevent many sick people from getting much needed mental health treatment. Is Heather McCready the new face of mental health awareness?

The video interview is followed by another video from her same interview with "The Dallas Morning News" music critic. In this video performance, Heather McCready sings her quirky title song, "Neverland" from her second CD with her very talented arranger/producer, Milo Deering, accompanying her on the acoustic guitar. This simple unplugged performance is stunning- even mesmerizing, and is well worth the time to watch.

For more information on Heather, to listen to and buy/download any songs from her 5 album collection of beautiful acoustic folk music, visit cdbaby.com/heathermccready or listen, buy and discover much more on the artist's own diverse website. It is filled with everything from Heather's creative photography to her thoughts on religious Philosophy. Follow Heather on Twitter @travelingirl1, and show support for her music and effort on her Facebook pages, "Join Heather McCready to Fight for Mental Health Awareness" and "Heather McCready Music". Subscribe to McCreadyTube to follow her videos and sign up as a fan to receive updates on music and concerts.

Heather is currently actively reaching out to the National Media in an attempt to share her story and make an impact for good. For inquiries about bringing Heather to your station or publication, contact Elizabeth(at)HeatherMcCreadyMusic(dot)com or call 817-231-0343.

Heather serves as an active board member at Mental Health America in Greater Tarrant County Since the healing she received over 10 years ago through shock treatments (or ECT) Heather has been stable and functioning well. Now, she is only treated for anxiety disorder.

A creative photographer, Heather takes pictures in her spare time and is a lover of nature.Find more pictures of Heather on FlikrStill a kid at heart, Heather plays the guitar in her favorite tree.

Heather McCready offer New Face of Hope For Mental HealthRead Heather McCready's Story at http://www.heathermccready.com/mystoryInside the "Give it a Day" CD. Heather created a collage to show the true variations in her mood from day to day throughout the creation of this CD.Heather works alongside virtuoso arranger/ producer and studio musician, Milo Deering, a well-known and highly respected name in Texas Music.

Heather had a packed house glued to their seats at the coveted Singer/Songwriter's Listening Room, Uncle Calvin's Coffeehouse In Dallas, Texas.Heather has a knack for effortlessly digging in deep and reaching the soul of listeners.

Heather McCready's fifth CD, is an award winning Editors Choice selection on CDBaby! Music critics say, "It's a very cool album!" It is available for download at CDBaby, iTunes, and her own website.This time the songwriter chose to fill her album with uplifting cover songs. She wanted to choose songs that people would recognize from era's gone by, but recreate them using her in her signature peaceful and often quirky style.

Her music is described as “refreshing”, “evocative”, “whimsical”, and even “mesmerizing.” Heather and her band use a blend of acoustic guitars, fiddles, mandolin, piano, cello, tin whistle, and uprighA Photo by Kim-Teske Photography

Heather McCready and her TrioPerforming with Cello and Violin, Mandolin and Guitar are usual for her.

Dallas singer-songwriter, author, and mental health advocate, Heather McCready sings from the heart.This was taken at one of her favorite intimate music listening rooms. Crossroads Music Company , in Winnsboro, Tx.