4 "Losers" from Tampa Bay WIN the #1 Weight Loss and Fitness Challenge, the Body By Vi Challenge

"The Vi-Tastic 4"! of Tampa Bay, set out on a 90 Day Challenge to lose weight and get fit in time for summer. For their efforts, they were rewarded in Los Angeles as Team Finalists in February for the Body By Vi 90 Day Challenge that awards $47 million in prizes to winners. 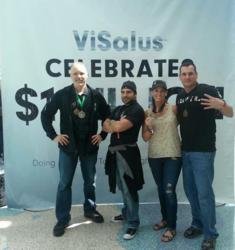 Taking the Body By Vi 90 Day Challenge together solidified a friendship through a common bond of living in excellent health!

"The Vi-Tastic 4" of Tampa Bay, Jamie and Sandra Clark, Joe Poretta and Allen Milletics, were finalists in the #1 Weight loss and Fitness Challenge, the Body By Vi 90 Day Challenge, which awards $47 million in prizes to its winners. As winners, they earned a photo shoot, a feature in the Vi-Life issue of Success Magazine, $500 in Vi-gear to show off their new summer bodies, and $250 in free ViSalus products.

The Vi-Tastic 4 team weren't even friends before the Challenge, but found a common bond and formed a great friendship in the effort to regain their vitality in pursuit of the WIN. Over the course of 90 days, the 4 friends worked out 6 days a week and took regular weigh ins and measurements to track their progress, holding each other accountable. They posted their updates daily to their Facebook fan page, and grew a following of people who cheered them along.

“We want to share the knowledge that we’ve gained by studying the success of people who have lost weight and transformed their health through the Body by Vi Challenge. What we learned is that losing those first 10 pounds can do wonders to someone’s motivation for long-term transformation,” said Ryan Blair, Co-Founder and Chief Executive Officer of ViSalus.

The Gasparilla Distance Classic was the final Challenge for the team, none of which had ever run a competitive race. It was truly a victory for them to complete, and to run alongside true athletes for the first time in their lives.

Now that the Vi-Tastic 4 has won, they are dedicated to helping others achieve their weight loss and fitness goals with the Challenge. People who are up for The Challenge can visit http://www.TryShakeFree.com to get more information on the Body By Vi Challenge.

Vi-Tastic 4 Team took their weight and measurements at 30 day intervals to track their progress for the WINVi-Tastic 4 Team did regular weigh ins and measurements to track their progress for the Body By Vi 90 Day Challenge and were February 2013 Finalists. The Challenge from ViSalus awards $47 million in prizes for its winners.