Vi UK Launched the Body By Vi Challenge in Birmingham England Where The Obesity Rate is 25% of the Population; Fully Expects to be UK's #1 Weight Loss Programme

In Birmingham, UK where obesity rates are at 25% and soaring, a solution is desperately needed. Enter the #1 Weight Loss and Fitness Platform from Vi that has already helped millions of people lose weight, with its unique Body By Vi 90 Day Challenge that awards $47 million in prizes. 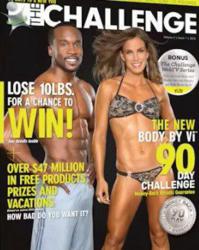 The Challenge Magazine will soon include success stories from the UK

We are thrilled to help our neighbors in the UK to achieve their weight loss and fitness goals, just as we have helped millions across North America. The Body By Vi Challenge is proven and guaranteed ~ there is nothing to lose, but the weight!

Birmingham, UK has a soaring obesity rate of 25% of the adult population (Obesity in the UK, University of Birmingham 2013). The Body By Vi UK Challenge is now available to the citizens of Birmingham, UK to help them meet their weight loss and fitness goals, with a 90 day results guarantee. The Challenge is North America’s #1 weight loss and Fitness platform, having helped more than 2 million people lose weight since it launched in 2009. With its unique platform which includes a Challenge kit to meet each Challengers goals, $47 million in free products, prizes and vacations awarded every year, and its extensive use of social media tools to support its Challengers, its results are proven and the transformations are documented daily.

“We believe the European marketplace is an opportune environment for ViSalus as our European neighbours are equally challenged by the obesity epidemic that is targeted so effectively by both the Body by Vi™ 90 Day Challenge and ViSalus product offering.”
Ryan Blair, ViSalus CEO

That statement is particularly true in Birmingham England where obesity rate soar amongst adults and children alike. The Body By Vi Challenge comes as a proven solution to an epidemic that is causing increasing strain on the economy as more citizens of Birmingham suffer from the diseases that result from obesity such as diabetes, high blood pressure, heart disease, and cancer (http://www.cdc.gov). The Challenge from Vi UK offers a viable way to lose the excess weight and get the nutrition that is required to live in vitality.

Individuals who wish to take the Body By Vi UK 90 Day Challenge can now order online at http://www.ChallengeBirmingham.co.uk and have their Challenge kits shipped from London and delivered directly to their Birmingham, UK address. Birmingham weight loss clinics, health clubs, group fitness instructors and personal trainers can contact Body By Vi UK for distributorship information at the same online address.

Vi CEO Ryan Blair, CMO Blake Mallen and Ambassador and Body By Vi Champion Melanie MilleticsTogether we fight the war on obesity, and fully intend to win. The UK Launch of the Body By Vi Challenge is a pivotal part of our strategy.