Cham Books Releases “The Place Where You Become True Is The Place Of Truth” By Best Selling Author Woo Myung, Founder of Maum Meditation

The Latest Book By Woo Myung, Founder of Maum Meditation, Clearly Describes The Path To Truth 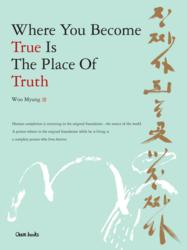 New book of Woo Myung, the founder of Maum Meditation

The book says that now is the time for ”human completion” by being reborn as truth and becoming a complete person.

Cham books releases an English translated book, “The Place Where You Become True Is The Place Of Truth” written by Best Selling author Woo Myung.

This latest release was first written and published in Korean in 2008, in South Korea.

After its release, it hit the best seller list and stayed at the top for four consecutive months and was a sensation in Korea.

The author, Woo Myung, is the founder of Maum Meditation, and his book “Stop Living In This Land, Go To The Everlasting World Of Happiness, Live There Forever,” has caught the attention of the world as it became a bestseller on Amazon in November 2012.

Throughout his book, Woo Myung talks about how to escape the false mind world oneself has create in order to become truth and live with wisdom.

Through this simple method of subtraction, anyone who subtracts their false mind can achieve a peaceful, happy life, and gain everlasting happiness.

Using simple expressions that readers of all ages can easily understand, “The Place Where You Become True Is The Place Of Truth” explains what truth is and what false is. Truth is the forever living and never dying universe itself and the world itself.

However, presently people are not living in truth, instead people live in pain and agony inside their false mind world, which was made from taking pictures of the world, thus, creating a false mind world. This is what is false.

For this reason, when people discard the entire false mind world and the self who lives in it, only the truth will remain. As Woo Myung writes, now is the time for ”human completion” by being reborn as truth and becoming a complete person.

When a man can escape from his mind and return to the Origin by discarding all of his customs and fixed ideas, humanity will live for others. As all of humanity achieves this, wars can end and there will finally be peace.

The latest release by Woo Myung describes this new ideal world which is already beginning to unfold.

Simple and clear illustrations drawn by Woo Myung, told from the true world about ways to live with wisdom, the way to become truth and live as truth, is narrated in a simple manner for readers of all genres.

The fifth English translated book written by author Woo Myung,“The Place Where You Become True Is The Place Of Truth” is now available in hardcover edition and e-book on Amazon.com.