Eduard Romanyuta Announces The Upcoming Release of His New Music Video, "Get Real With My Heart," Filmed in Los Angeles

Eduard Romanyuta presents a new music video for his song "Get Real With My Heart" which was created under the direction of Dale S. Lewis. 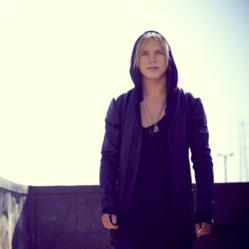 The song lived up to Eduard's expectations and soon became a top-notch hit that got to the top positions of the Ukrainian charts and attracted attention from European music producers.

The release of Eduard Romanyuta's new music video "Get Real With My Heart" is fast approaching. Fans of the Ukrainian born artist will be able to see the new video on VEVO and YouTube when it is finally released to the public. The release of the video is expected to take place within the next several weeks.

News about Eduard preparing a new video during his vacation in California has been fervently discussed by his fans since his trip. The first reports about the "making of" process and the photo shoots caused a tremendous stir among the singer's fans in the social networks. Finally, Eduard and his team are ready to present their new video masterpiece to their eagerly awaiting fan base.

The actual making of the video took place in Los Angeles, at "Hollywood World" studio. The director Dale S. Lewis worked with a talented team, consisting of the crew and a team of American hip-hop dancers. Eduard’s friend, an extremely talented dancer named Teresa, played the main part opposite Eduard. The episodes were filmed next to the ocean and in the streets of Los Angeles itself. The team worked with unprecedented inspiration, in spite of their constant cold and exhaustion. Energetic dancers even got a storm of applause from onlookers after each take. Though Eduard and his team were exhausted they were extremely happy with the final product. Eduard reportedly said that the video will impress the viewers with "brightness, colorfulness and an interesting plot".

The song "Get Real With My Heart" was written by Swedish authors specially for Eduard's participation in Ukrainian National Selection for Eurovision-2013. The song lived up to Eduard's expectations and soon became a top-notch hit that got to the top positions of the Ukrainian charts and attracted attention from European music producers.

Eduard Romanyuta is a young star of the Ukrainian stage. From his early childhood he won numerous All-Ukrainian and international song contests and now he is confidently conquering the Ukrainian and European music space. He took 3d place at National Eurovision Selection and he enjoys a constant rotation of his songs on all popular radio stations across Europe as well as numerous nominations and music awards. He is now proud to present the music video for his famous song: "Get Real With My Heart". To learn more about Eduard Romanyuta, please visit: http://www.eduardromanyuta.com