A DVD, CD and video game Price Match Trade Guarantee Program, starting April 2013, is now being offered by re-commerce leader AbundaTrade. The company will match a price offered by a competitor on a trade on any DVD, CD or video game and by offering this program traders will know if the price quote they get for a trade is equal to or better than anywhere else. 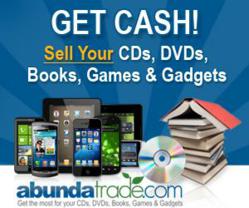 States AbundaTrade's Kent Wagner, "We encourage people to take advantage of our offer to purchase their used DVDs, CD’s and video games, especially because of our new Price Match Trade Guarantee Program.

DVDs, CDs and video games are hot commodities these days still, but with the advent of “the cloud” and streaming video services customer bases growing like crazy, with one company now serving over 30 million customers, people are starting to realize that eventually theses items may someday go the way of beta-max® video tape, the 8-track and music cassette tapes. Re-commerce market leader AbundaTrade has recognized that trend and in response it has rolled out a price match guarantee program on all DVDs, CD’s and video game trades with the company. The company is going to start adding wall posts to the AbundaTrade Facebook® Fan page and tweet on its AbundaTrade Twitter®account about trades, special items for sale and about the top "Trade of the Week".

AbundaTrade’s purpose in announcing their DVD, CD and Video Game Price Match Guarantee Trade Program is to put the word out in a big way about the new program and to push the company’s on-going agenda to grow their world-wide presence in the reCommerce industry, particularly electronic gadgets.

People with DVDs, CDs and video games sitting around the house can now turn to AbundaTrade.com and get more money for them more often than anywhere else. Because of the company’s price match guarantee trade program none of the company’s competitors will be able to beat AbundaTrade’s price.

Because of the new price match guarantee program from AbundaTrade’s view point and for consumers, selling used DVDs, CD’s or video games anywhere else is like taking money out of the “re-commercing” consumer’s pocket and handing it to the company’s competitors.

Getting paid less than what something is worth, like used DVDs, CD’s and video games, is just like holiday shopping when you buy an item then see it priced lower somewhere else. When that happens it hurts and Abundtrade.com is in business to pay more and make that hurt a thing of the past. Abundatrade.com pays more money on more products than any company in the “reCommerce” business.

AbundaTrade.com came onto the global reCommerce scene when the company opened for business in 2008. The primary focus of the company is to buy trade and sell used items including phones, laptops, sound systems, game consoles, gadgets, and more.

Established in 2008, AbundaTrade.com is proud to be a part of the global reCommerce industry. Their efforts are focused more on trading and selling of used items instead of discarding old items in favor of new ones. By concentrating on the options available through trading items, AbundaTrade.com offers its customers the opportunity to obtain items for less as well as providing an environmentally friendly way to shop. In addition to helping the environment by repurposing phones, gadgets, books, CD’s, DVD’s and video games, AbundaTrade.com also uses reuses packing material and recyclable shipping materials whenever possible. At AbundaTrade, they believe in being smart and mindful consumers.

About AbundaTrade.com:
The company, AbundaTrade.com is the modernization and revitalization of Millennium Music, a once stubbornly successful independent music retailer and Inc Magazine case study. AbundaTrade.com guarantees the highest overall value online for your gadgets, used CDs, used DVDs, used Books, used Blu-Rays and used Video games. The company specializes in ‘re-commercing’ consumer products by purchasing them for cash then reselling them online. The company typically pays significantly more for more products than any other company in the industry

AbundaTrade’s purpose in announcing their DVD, CD & video game price match guarantee trade program is to push their on-going agenda to grow their world-wide presence in the reCommerce industry.