The lawyer and international law professor is an accomplished entrepreneur with an exciting history beyond the autobiographical story of the new novel co-authored with John Goldsmith. 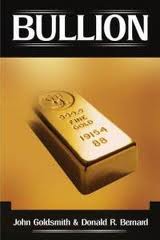 We changed the names of the principal players and filtered the story through a dramatic lens to enhance the excitement factor, but this is essentially the true story as it happened

When the underworld accepted one of the greatest private hoards of gold for collateral to settle a debt, Donald Bernard was one of two men commissioned to secretly sell the gold to private investors. Competition from a major international bank and one of the 20th century’s biggest gold market fixes that led to a doubling of the price of gold in three weeks ensued. The unfolding of these events of international finance and intrigue are at the heart of the new book “Bullion” by Donald Bernard and Co-Author John Goldsmith.

The new autobiographical novel, published by iUniverse and available from Amazon and Barnes & Noble, is quickly catching the attention of readers around the world. “We changed the names of the principal players and filtered the story through a dramatic lens to enhance the excitement factor, but this is essentially the true story as it happened,” said Bernard.

The international law professor and lawyer is also a highly accomplished commercial pilot that works as a consultant for international business.

Donald Ray Bernard is no stranger to adventure as co-owner and manager of Golden Stag Safaris at the Nehuen Mapu Big Game Hunting Ranch in Central Argentina. Bernard has other successful entrepreneurial holdings in Central and South America ranging from hosting fly fishermen in Argentina to rainbow trout farming for sales to Buenos Aires, Europe and North America. Don Bernard was recently recognized by the National Association of Advancing Business Organization as one of the greatest entrepreneurs of 2012.

His Co-Author John Goldsmith is the author of four novels as well as several children's books including "Voyage of the Beagle," a story about Charles Darwin. Goldsmith has also done scripts for many television programs.

The new novel “Bullion,” which follows the shady dealings in the international gold market through Bernard’s firsthand accounts, is available in both English and Spanish. For more information on Donald Bernard, please visit http://bigsight.org/donald_r_bernard

Donald Bernard is a lawyer and International law professor, former Texas Assistant Attorney General and successful international entrepreneur based in Montana. The successful entrepreneur with business interests in Central and South America is also an accomplished commercial pilot. He has recently co-authored the autobiographical novel “Bullion” with author John Goldsmith that tells the story of shady dealings in the international gold market that led to one of the biggest market fixes of the late 20th century.