A former history teacher creates a world in which Germany and the United States don’t declare war in 1941 in this new book released by Dog Ear Publishing. Political intrigue fuels a conspiracy of global proportions. 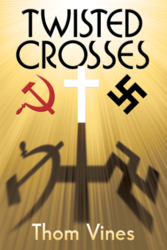 Murder, deceit and betrayal become the tools of masterminds devoted to their cause, creating a global conspiracy that changes history.

(PRWEB) April 04, 2013 -- Four days after the bombing of Pearl Harbor by the Japanese on Dec. 7, 1941, Adolf Hitler declared war on America. That same day, President Roosevelt declared war on Germany, hurtling the world into another war that stretched across continents. Those actions changed history, but as this new novel proposes, what would have happened if Germany and the United States had not entered into war with each other? Who might have gained if neither side fought the other, and what kind of power could have manipulated history in that way?

“Twisted Crosses” centers on a conspiracy of global consequences featuring two of the most powerful nations on Earth, detailing a web of behind-the-scenes players who call the shots. Spies and manipulators with influence at the highest levels operate on both sides, and a German organization serves as a Nazi front for subversive operations in the United States. Murder, deceit and betrayal become the tools of masterminds devoted to their cause, creating a global conspiracy that changes history. Twists and turns keep readers engrossed in this political thriller about what could have been.
This is the third book for author Thom Vines, a former history teacher and current deputy superintendent of Lubbock-Cooper ISD in Texas. The 2011 Beach Book Festival runner-up “Tragedy and Trust, Can You Still Trust God After Losing a Child?” tells the story of the tragic loss of his twin daughter Kelsey in 2008 when a dump truck veered into her lane. His second book, the novel “Hope’s Ante,” was runner-up in the Southern California Book Festival in 2012. Vines and his wife, Becky, have two children: Jeremy and Kayla.
----------
For additional information, please visit http://www.thomvines.com.