Baroness Joan Bakewell is elected President of Birkbeck, University of London, and speaks up for part-time students. 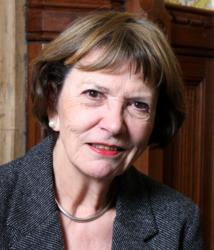 In response to the dramatic downturn in part-time students nationwide, unprecedented support is needed now to ensure part-time study thrives in future.

Baroness Joan Bakewell, Birkbeck’s new President, is speaking up for the importance of part-time study as national figures show a sharp drop in part-time student numbers.

The distinguished journalist and Labour peer is injecting renewed energy into Birkbeck’s campaign to champion the vital benefits of part-time study for the economy, employers and employees. She warns that the professional and personal development of the workforce, and the prospects for much-needed economic growth and social mobility, are being jeopardised by the lack of support for part-time students.

Baroness Bakewell says she will use her new role at Birkbeck, University of London, to exert pressure on Government to support part-time higher education and make the highest quality university education accessible to students for whom the traditional full-time, daytime route is not an option. She was elected to the honorary and ceremonial role of President by Governors of Birkbeck, and succeeds the late great Marxist historian Professor Eric Hobsbawm before a memorial event celebrates his life later this month.

Baroness Bakewell said: “Part-time study is crucial for our society. It improves skills and kick-starts new careers – exactly what we need for the economy, employers and individuals during these difficult economic times. In response to the dramatic downturn in part-time students nationwide, unprecedented support is needed now to ensure part-time study thrives in future.”

One-third of undergraduates study part-time, and the importance of part-time study for the economy and social mobility is widely recognised by recent research, including An avalanche is coming: Higher Education and the revolution ahead (IPPR), Futuretrack: Part-time students (HECSU), and University Challenge: How HE can advance social mobility (Independent reviewer on social mobility, Alan Milburn).

Despite its benefits, part-time study faces a challenging and uncertain future, largely because of the Government’ s introduction of higher tuition fees and the failure to communicate the new loan system effectively to prospective part-time students. Statistics released recently by the Higher Education Funding Council for England show that since 2010 across England part-time undergraduate numbers have fallen by 40 per cent; part-time postgraduate numbers have fallen by 27 per cent.

Baroness Bakewell, who rose to fame as one of the first women in television journalism in the 1960s, praised Birkbeck’s unique provision of evening higher education. The broadcaster and writer also emphasised her close association with Professor Eric Hobsbawm, who died last year. She was taught History by him at the University of Cambridge in the early 1950s, and feels honoured to follow in his footsteps as President of Birkbeck.

Baroness Bakewell said: “I am really excited about becoming the President of Birkbeck. I have always known about Birkbeck and have admired its principles to balance the highest quality university education with a commitment to accessibility and social mobility as they chime very much with my own. There is a vast segment of people who haven’t had the opportunity to access university and there needs to be greater appreciation of this. Birkbeck is well placed to answer the needs of what is increasingly a very flexible workforce. Birkbeck is at the hub of all those needs in a way that many universities simply aren’t.”

Baroness Bakewell seeks to raise the profile of part-time study through her work as a journalist and Labour peer. She added: “I think it is very important to keep the pressure up on Government. I certainly intend to be vocal.”

Speaking of Professor Hobsbawm, Baroness Bakewell said: “He was passionate about history, and about ideas which sprang from the knowledge of history. Eric was enormously forthcoming, very friendly, and very amiable, and would tell you ‘That’s a good idea, what do you think we can do with that?’ He was a really engaged teacher. Birkbeck answered all his political attitudes about what should be offered to people as a right as citizens, and I share that absolutely and grew up with that ethic in my lifetime.”

Baroness Bakewell’s long-standing support for part-time higher education stems from her parents’ experiences at the local Mechanics’ Institute in her hometown of Stockport.

Baroness Bakewell, 79, who was the Government’s Voice of Older People from 2008-2010, also endorsed recent comments by David Willetts, Minister for Universities and Science, calling for the over-60s to study at university. She said: “Learning is rewarding to people – it’s even rewarding to their health. If you are really engrossed in study and enjoying what it does for your mind, you will actually be more alert. You will be healthier and happier.”

Professor David Latchman, Master of Birkbeck, added: “We are delighted to welcome Baroness Joan Bakewell as President of Birkbeck at this historic and critical moment for the university sector. She is a passionate supporter of part-time higher education and non-traditional students, and brings her valuable experience as a journalist and campaigner to this important role. We look forward to working with Joan to continue to promote the all-important, but neglected, benefits of flexible evening study to students, employers, the economy and society.”

Baroness Bakewell became well known as a television presenter on BBC 2’s Late Night Line Up – a live arts and discussion show – from 1965-1972. Many other shows followed, including Reports Action, debate series Heart of the Matter, and Taboo – a series about concepts of taste. She has also written columns in national newspapers (The Guardian, The Independent, and The Times), an autobiography (The Centre of the Bed) and two novels (All the Nice Girls, and She’s Leaving Home).

In November 2010, Baroness Bakewell was awarded a life peerage, and she joined the Labour benches in the House of Lords.