‘Azerbaijan Through the Lens’ astounds a Berlin audience

There were over 200 attendees at the opening of the 'Azerbaijan Through the Lens' exhibition at Epicentro Art in Berlin, organised by The European Azerbaijan Society 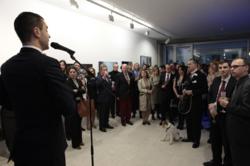 Epicentro Art, in the heart of Berlin-Mitte, was completely filled with attendees

The 'Azerbaijan Through the Lens' exhibition has been organised to show the different facets of the nation.

On 4 April, more than 200 diplomats, celebrities and members of Berlin society packed Epicentro Art, located in the vibrant Berlin-Mitte district of the city. This edition of the Azerbaijan Through the Lens exhibition, organised by The European Azerbaijan Society (TEAS), showcased 55 photographs of contemporary Azerbaijani people, culture, landscapes and architecture. Attendees included H.E. Parviz Shahbazov, Ambassador of Azerbaijan to Germany and Lionel Zetter, Director, TEAS.

Originally presented in a different format in London in November 2012 and Paris in March 2013, these photographs were selected from around 750 submissions received from photographers based in Azerbaijan and across the world that were entered for a TEAS-run competition. The exhibition succeeded in capturing the very essence of this fascinating country, which sits on the Caspian Sea. All of those who attended were entranced by the views of this country and the remarkable quality of the images.

In his introduction, Shahin Namati-Nasab, Director, TEAS Germany, said: “For nearly five years, TEAS has been organising events in Europe that demonstrate Azerbaijan’s position as a westward-facing country. These have been expanded to Germany since TEAS opened an office in Berlin three years ago. The 'Azerbaijan Through the Lens' exhibition has been organised to show the different facets of the nation, particularly focusing on its nature, art and history. I hope the photographs will be of interest to all of you, and that you will decide to find out more about the country, or even travel there.”

Marc Fiedler, Gallery Owner, Epicentro Art, commented: “This remarkable exhibition is being held in the new Epicentro Art premises, located in Berlin-Mitte. This is the centre of the Berlin art scene, and is where art happens in the city. I am delighted that my gallery was chosen to play host to these wonderful images.”

The judges for the competition were renowned royal photographer Henry Dallal and Caroline Metcalfe, Photographic Director, Condé Nast Traveller magazine. The winner was Asim Talib for his delightful photograph 'Old Men', taken in 1985 in Kelbajar, Karabakh (currently occupied by Armenia).

Second prize was taken by an amazing representation of the ceiling of the Bibi Heybat Mosque by Etibar Jafarov. Originally constructed in the 13th Century, and visited by Alexandre Dumas in the 1840s, this was destroyed by the Bolsheviks in 1936. Following the regaining of Azerbaijani independence, the reconstructed mosque was reopened in 1997.

Fuad Babayev took the photograph that received the third prize – 'The Flames and the Needle'. This focused on the Flame Towers, a new icon of Baku, juxtaposed against the telecom tower. A keen amateur photographer, Fuad has embraced social media and currently has more than 10,000 followers on Google+.

A selection of images from the exhibition can be seen at http://www.teas.eu/azerbaijan-through-the-lens. The exhibition is touring all the major European cities in which TEAS has offices during the course of 2013, and will open in Brussels on 24 June.